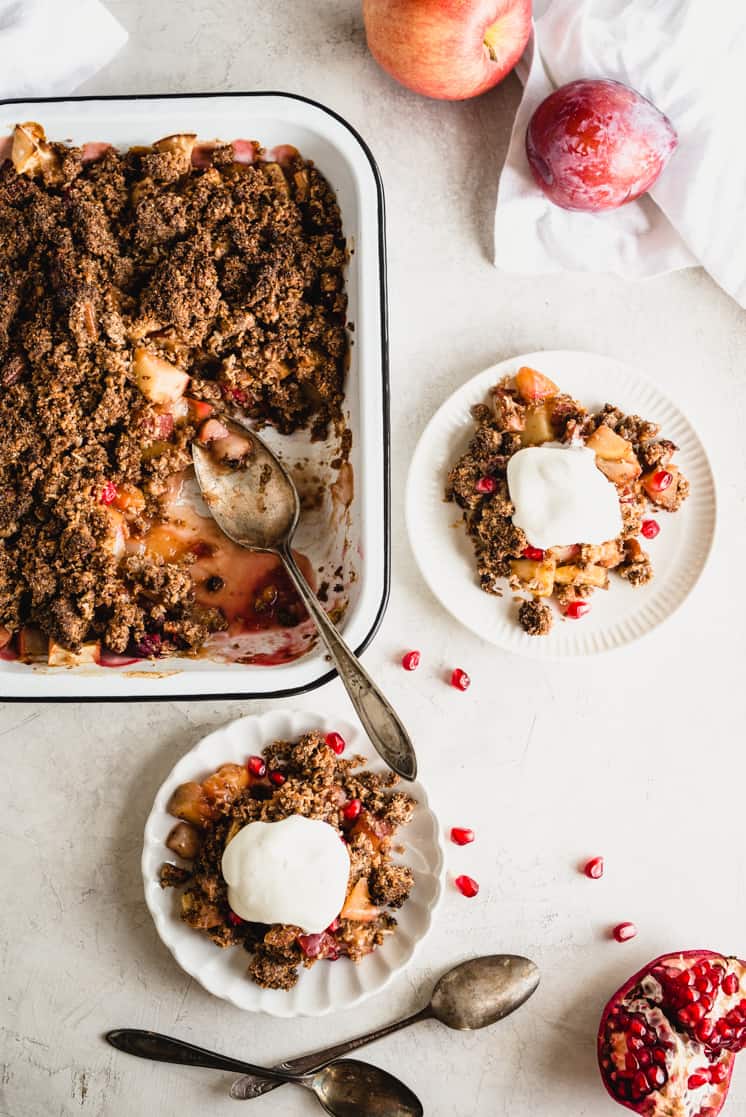 Gluten-Free Apple Crisp with Cranberries is one of the simplest fall desserts you can make. No fussing with pie crust or any of that jazz. 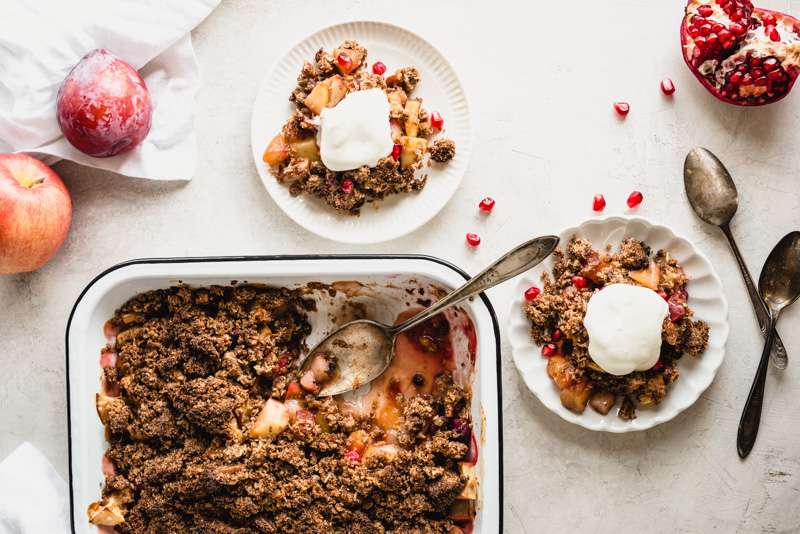 I made this one with extra topping because that’s what my siblings used to fight over when we were kids.

The Difference Between a Crisp and a Crumble

If you’re new to the blog, I’m gonna break it to you now: I’m not much of a baker. There are precious few baked dessert recipes on this website – though laster year I made some mini sweet potato pies that were out of this world. Suffice to say, I rarely bake so when I do, you know it must be good. This gluten-free apple crisp is one of the simplest desserts you can make and it takes just a few minutes to put together.

Now technically, this dish is a crumble, not a crisp. But nobody searches for crumble recipes so a l took a small liberty with the name. Both describe a baked dessert with fruit on the bottom and a streusel topping that’s baked to perfection.

For a crisp, the topping usually has oats in it along with flour, butter, sugar, and sometimes nuts.

A crumble, on the other hand, typically has no oats.

If you love oats, toss some in. They’re not my personal favorite so I left them out. 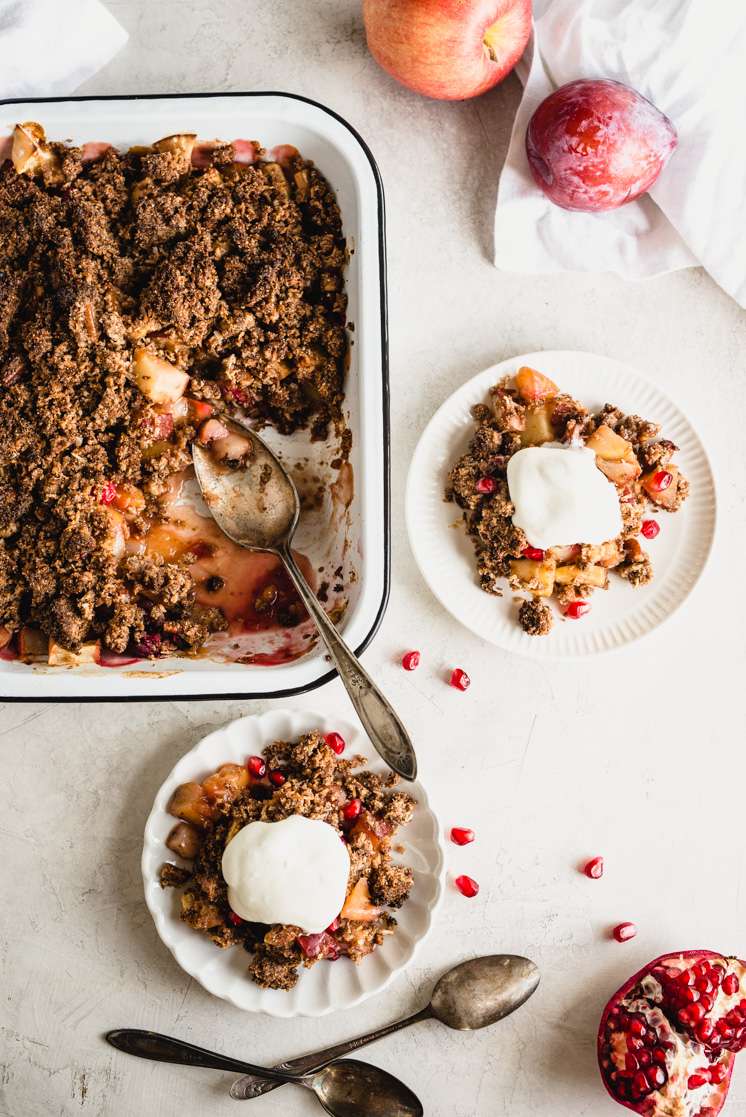 Can You Make Apple Crisp Healthier?

Okay, just so we’re clear: this is a dessert. It has sugar and fat and isn’t low cal. (If you want a great low calorie dessert, just eat an apple. Seriously.)

But if your idea of “healthier” means free from potential allergens like gluten, then this one’s for you. Because I omitted the oats and flour, this apple crisp can work if you must avoid those foods. Note that oats, while naturally gluten-free, are usually processed on shared equipment with wheat and may be cross-contaminated. If you have Celiac disease, be aware.

First, I chopped up the fruit. In this case I used a mixture of apples and pears because pears came in my weekly Imperfect Produce box. Think pears are gross? No problem. Use six apples in the recipe instead. I also threw in some fresh cranberries for tartness.

The topping can be quite sweet, so I like the sour counterpoint of the cranberries. Then, I tossed the raw fruit with some arrowroot flour to help thicken the juices as it bakes and spread the fruit in the bottom of a greased baking dish.

Next, I made the streusel topping by combining almond flour, unsweetened shredded coconut, coconut sugar, and chopped pecans with melted grass-fed butter. The melted butter helps the topping moisten so it makes little clumps when you spread it on top of the fruit. 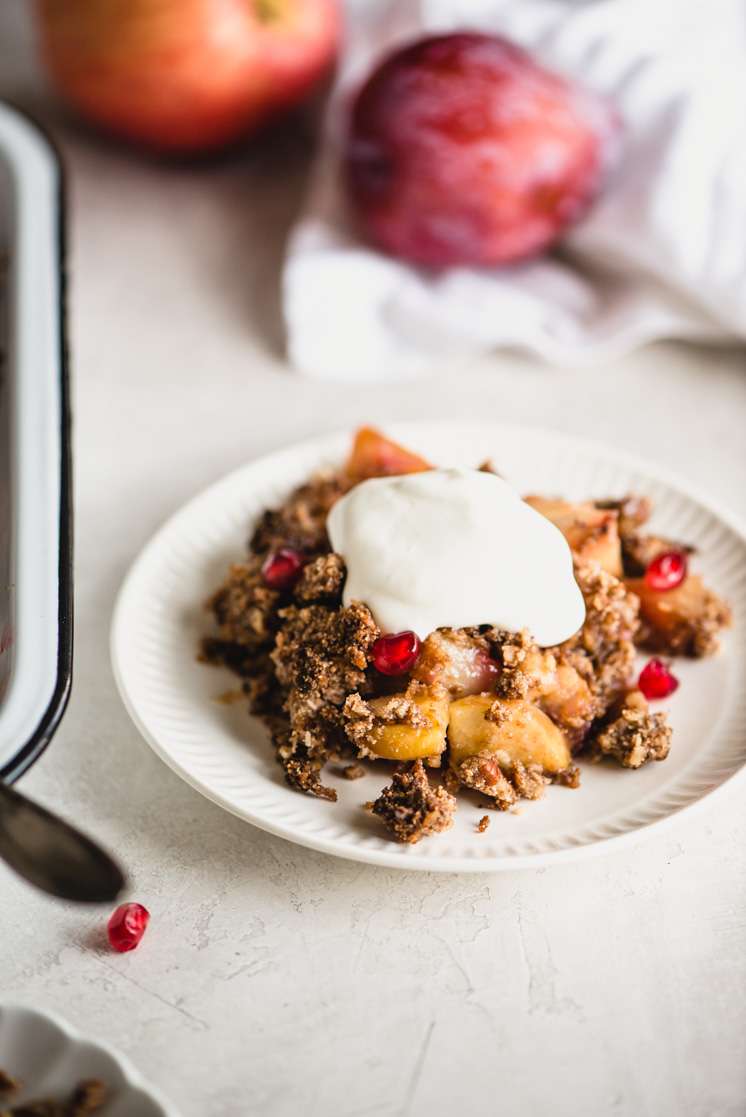 If those topping ingredients don’t work for you, it’s pretty easy to make substitutions. For example, try melted ghee instead of butter or switch out the nuts. NBD.

Bake until the fruit is softened and bubbly and the topping is crisp.

What Kind of Apples Can You Use for Gluten-Free Apple Crisp?

Apple crisp is a pretty forgiving recipe and most apples will work just fine. While I prefer to use a mixture of a few different types for flavor and texture, use what you like and have on hand. My favorites are pink lady, granny smith, and honeycrisp.

I’d probably avoid cooking apples like Macintosh and Cortland because they turn to mush in an instant. Need more guidance? Check here.

As for other fruit, pears and plums work well, and you can also include berries. Make it your own! I tossed on some fresh pomegranate arils after baking for a fresh pop of color and flavor. 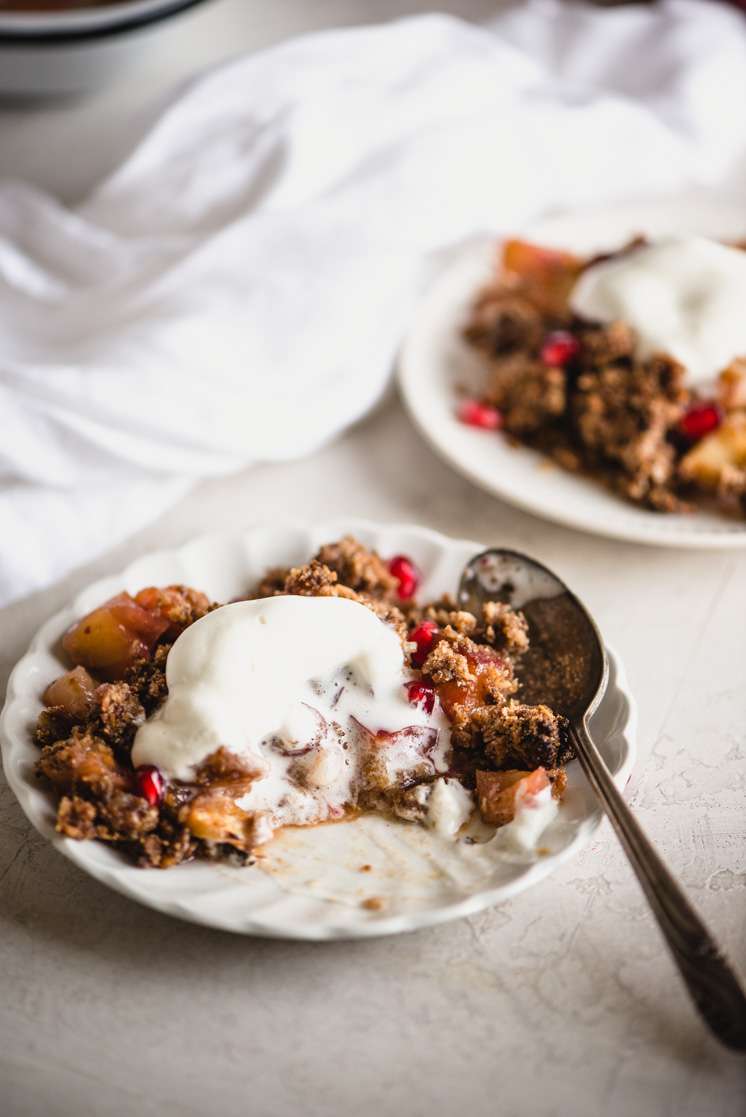 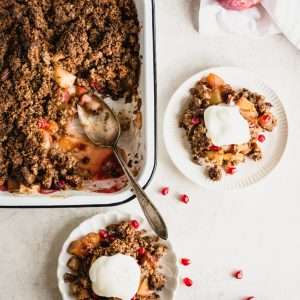 Gluten-Free Apple Crisp is an absolutely delicious treat that's perfect for fall. Make it with apples, pears, and cranberries for Thanksgiving dessert.

For the fruit base

*To make apple crisp, use six large apples and omit the pears.

For a true crisp, use gluten-free oats instead of almond flour.

If you can't use butter, try ghee for a buttery flavor. If that's not an option, use coconut oil.

Pin this Gluten-Free Apple Crisp with Cranberries for later! 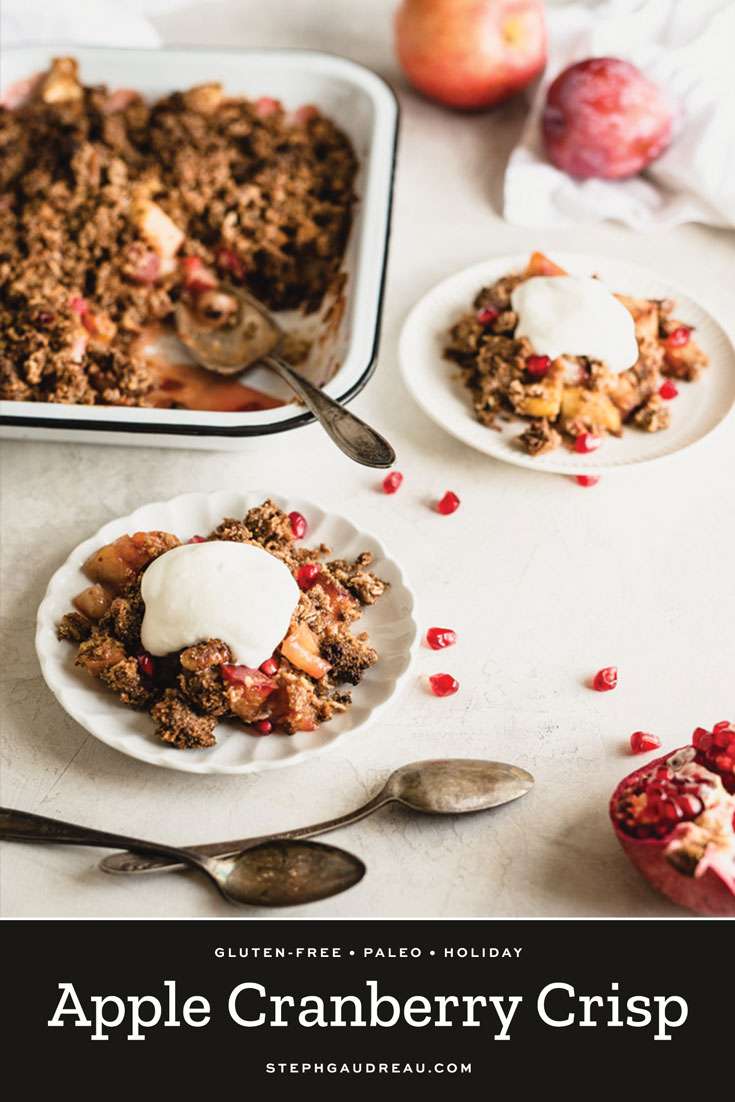 Love this recipe? Leave a rating and comment below. I love hearing from you! 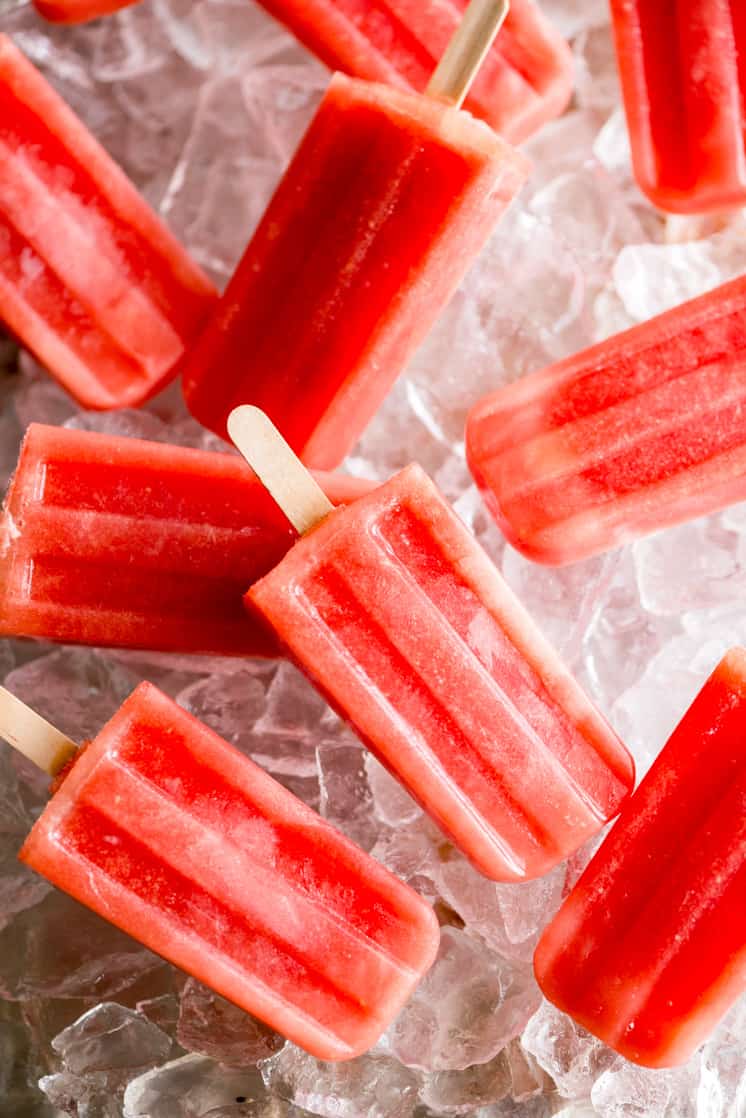 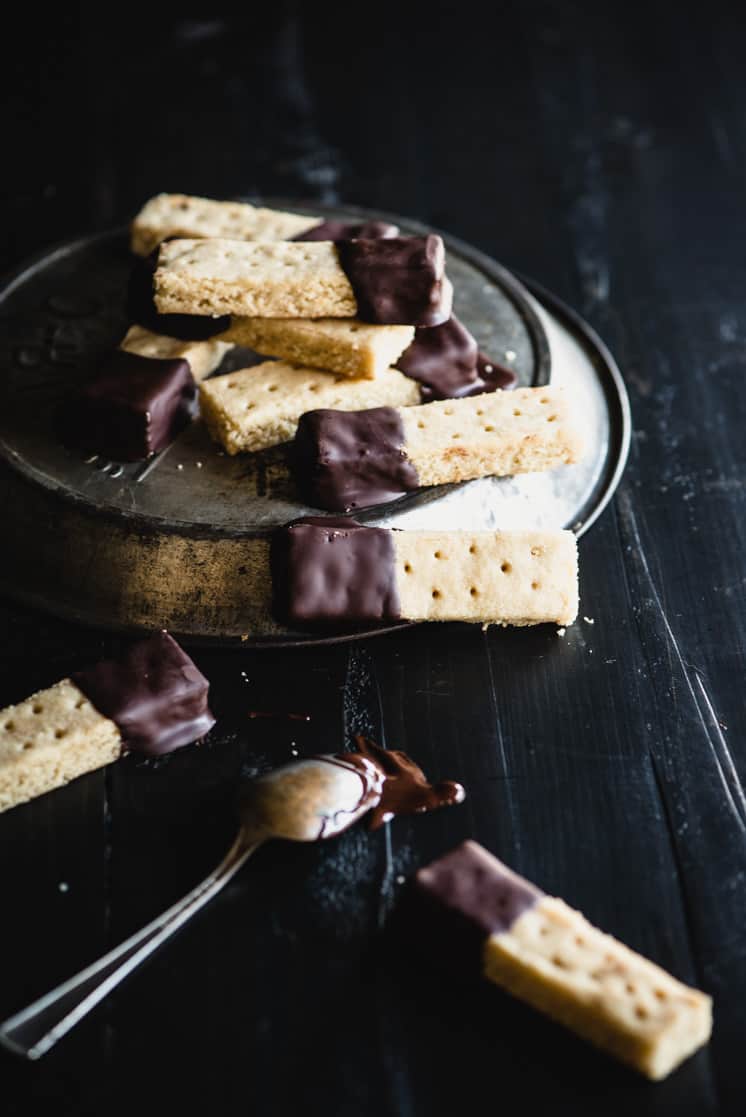 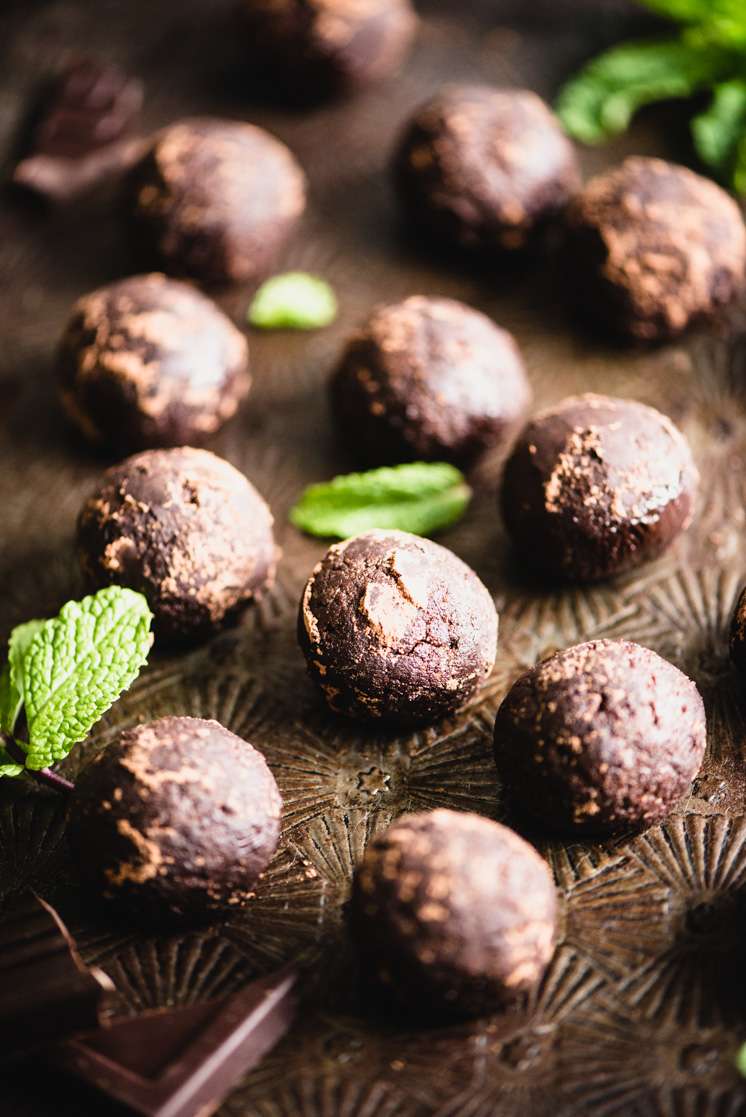 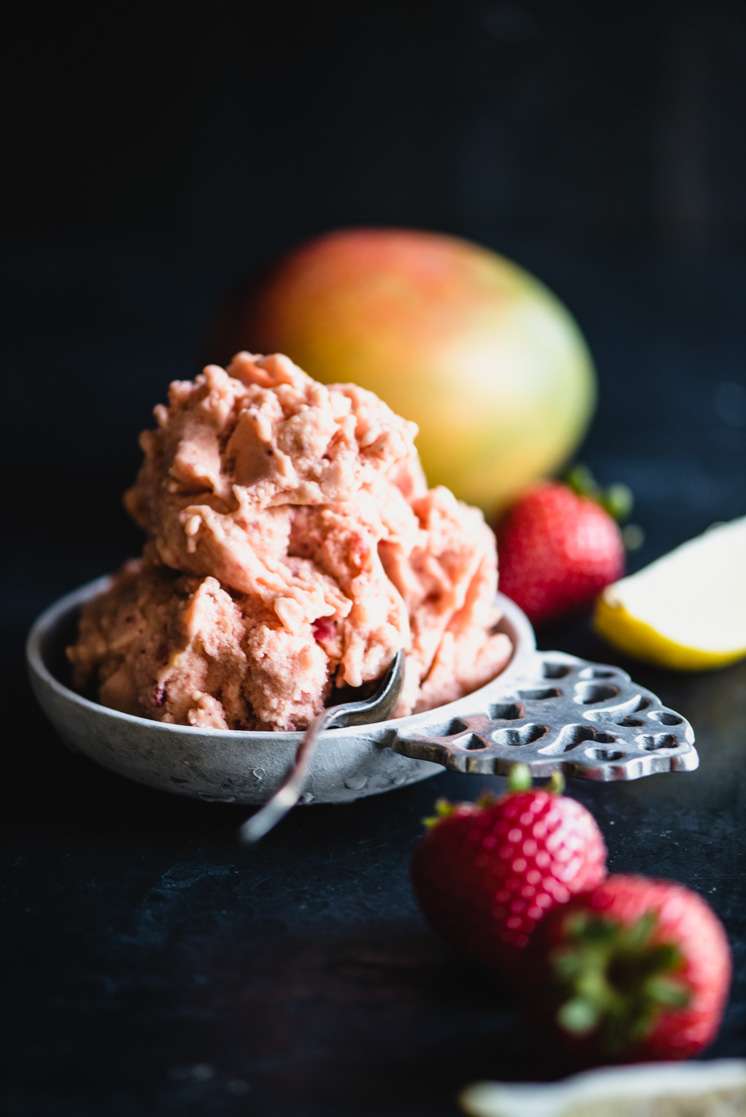