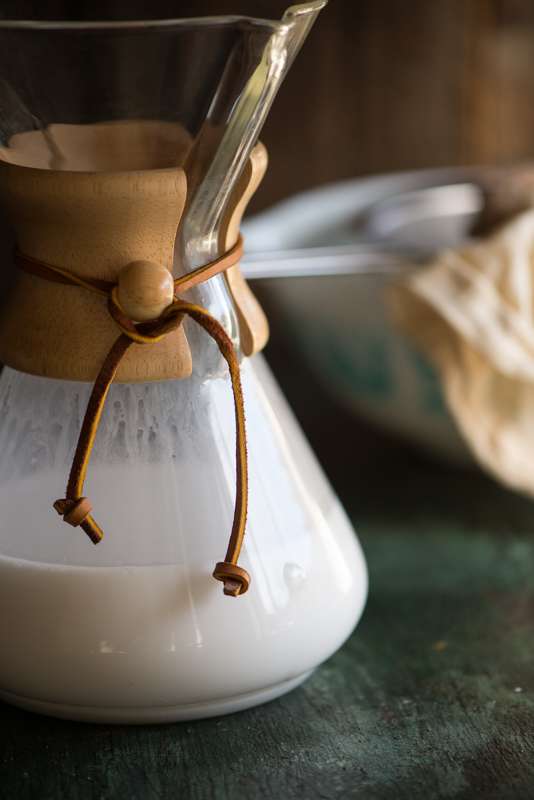 Homemade Coconut Milk is my new obsession. You won’t believe how easy – and way more yummy than store-bought – it is! 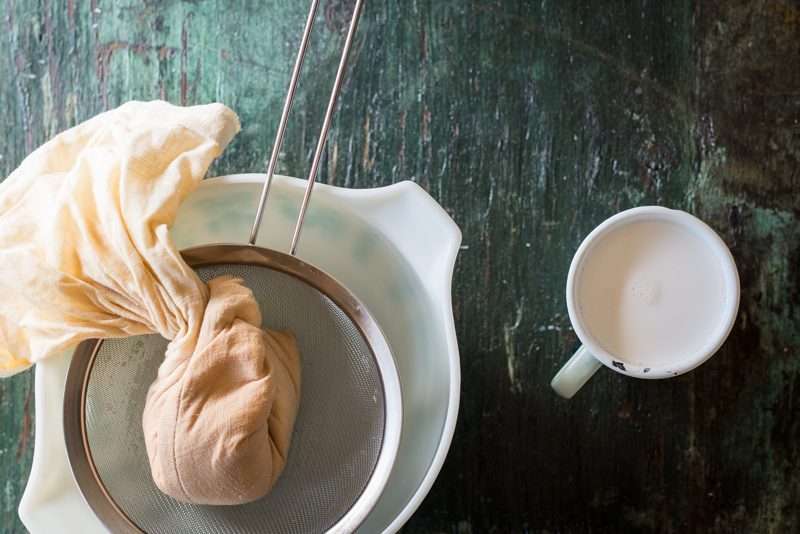 A few months ago, I went back to avoiding cow dairy – except for ghee and butter – because I’d been experiencing some worsening endometriosis symptoms. Bet you didn’t think a homemade coconut milk recipe was going to go there!

Dairy, particularly the higher casein forms of dairy that come from A1 cows, is known to be inflammatory. Since endo is linked to autoimmunity, it made sense to remove casein-rich dairy for a while. And that meant no more heavy cream in my coffee. Sad trombone.

(I’m also avoiding milk, cheese, and yogurt. Grass-fed butter and ghee have very little casein. Dairy from goats and sheep doesn’t have the same casein structure as A1 cow dairy. And for some people, goat or sheep dairy may be better tolerated for that reason. Like a cryptic Facebook relationship status, dairy is…complicated.) 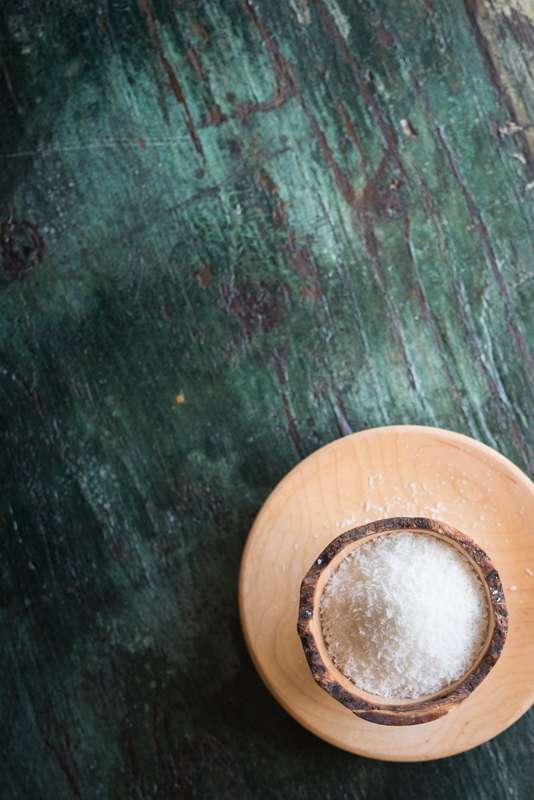 All of this goes to show you how personalized nutrition really has to be if you’re looking for long-term health improvements. It’s yet another reason why I’m moving away from the “paleo” name for what I do. Bioindividuality and personalization, for the win!

Why Homemade is Better

Okay, so what does this have to do with homemade coconut milk? Unable to use cream in my coffee, I was looking for a better alternative. Y’all, I bought and tried every nut milk replacement available in my local market. They all disappointed me.

Too watery. Too many frickin’ weird gums and additives. Sugar. No thanks.

And to me, canned coconut milk just has a weird flavor when I put it in coffee. (I’m a supertaster.) 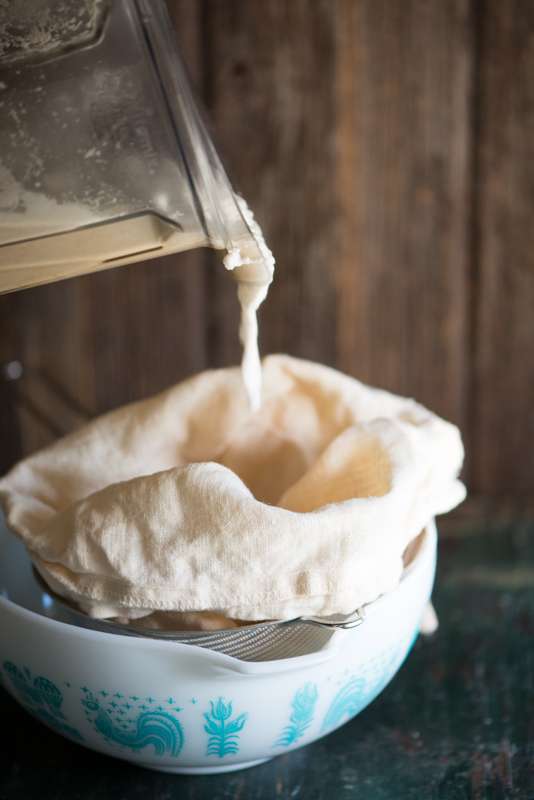 I’ve got recipes for Homemade Almond Milk and Homemade Vanilla Hazelnut Creamer here on the site, true, but I decided to get over my intimidation of making homemade coconut milk myself.

The result was way better than I hoped for a few reasons!

What’s In This Coconut Milk

Second, there’s zero emulsifiers. Not everyone digests these emulsifiers – additives that keep the water and fat in the coconut milk from separating – very well.

Third, the homemade coconut milk is pleasantly sweet and fresh tasting. I don’t get that same funky taste that I often get from canned coconut milk. (Yes, I’m buying BPA-free cans.) And yes, this coconut milk tastes like coconut. 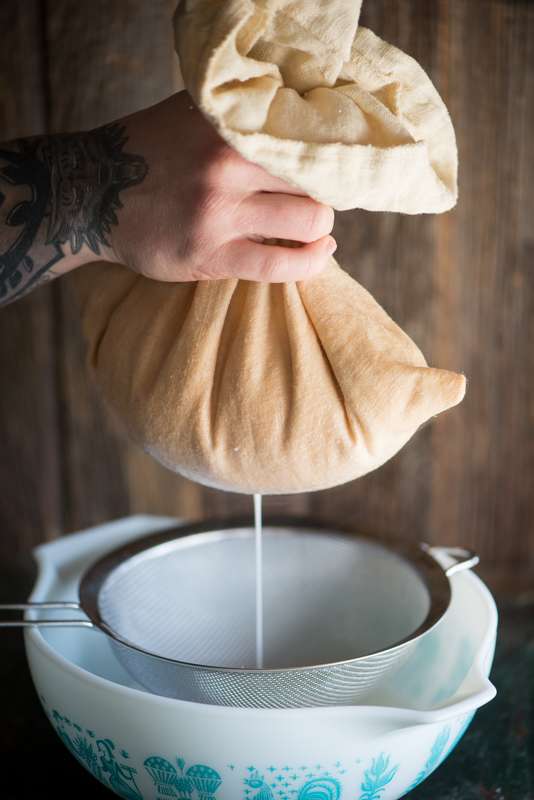 And lastly, this may sound weird, but making my own coconut milk is a simple way for me to slow down with my food. Look, no judgment. If you’re so busy that making your own coconut milk at home is a total non-starter, that’s okay.

You’ve gotta do what you’ve gotta do. But earlier this year, I realized that I wanted to take a bit more time to make certain things from scratch again like when I first started eating a nourishing whole foods diet. To me, it’s enjoyable and a way to slow down a little.

How to Make Homemade Coconut Milk

Making this Homemade Coconut Milk couldn’t get much simpler. You’ll soak unsweetened, shredded coconut in hot water, blend it up, and then squeeze it through a nut milk bag.

If you don’t have a nut milk bag, you can use several layers of cheesecloth.

From there, you’ll store your Homemade Coconut Milk in the fridge for up to a week. Just give it shake before using since the layers will separate.

If you want an even richer, creamier coconut milk, reduce the water from four cups to three.

Wondering what else you can use this homemade coconut milk in? Try my:

You will have spent coconut pulp leftover. I’m sure there’s really clever way to use it in baked goods once you dry it in the oven…but I don’t bake so you’re on your own there! 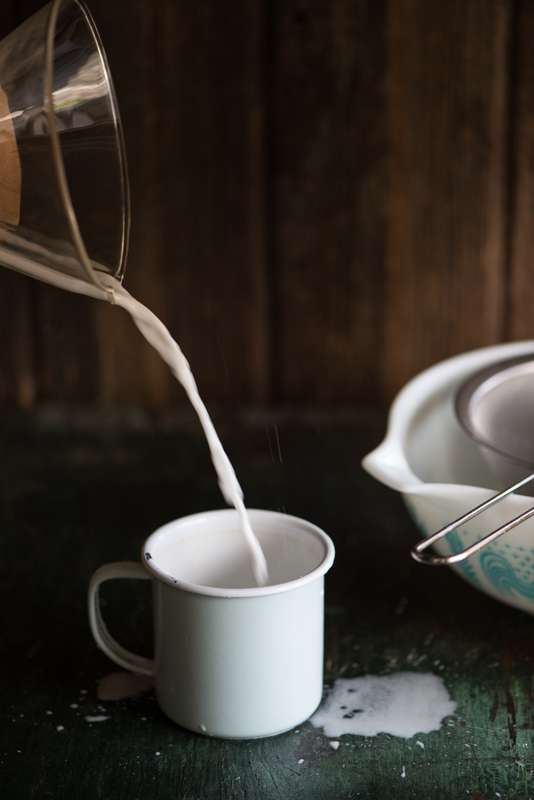 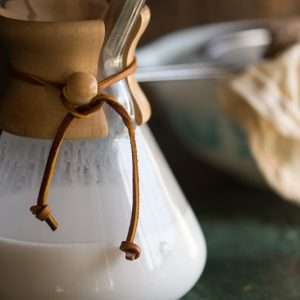 No nut milk bag? No problem. Strain your homemade coconut milk through several layers of cheesecloth. 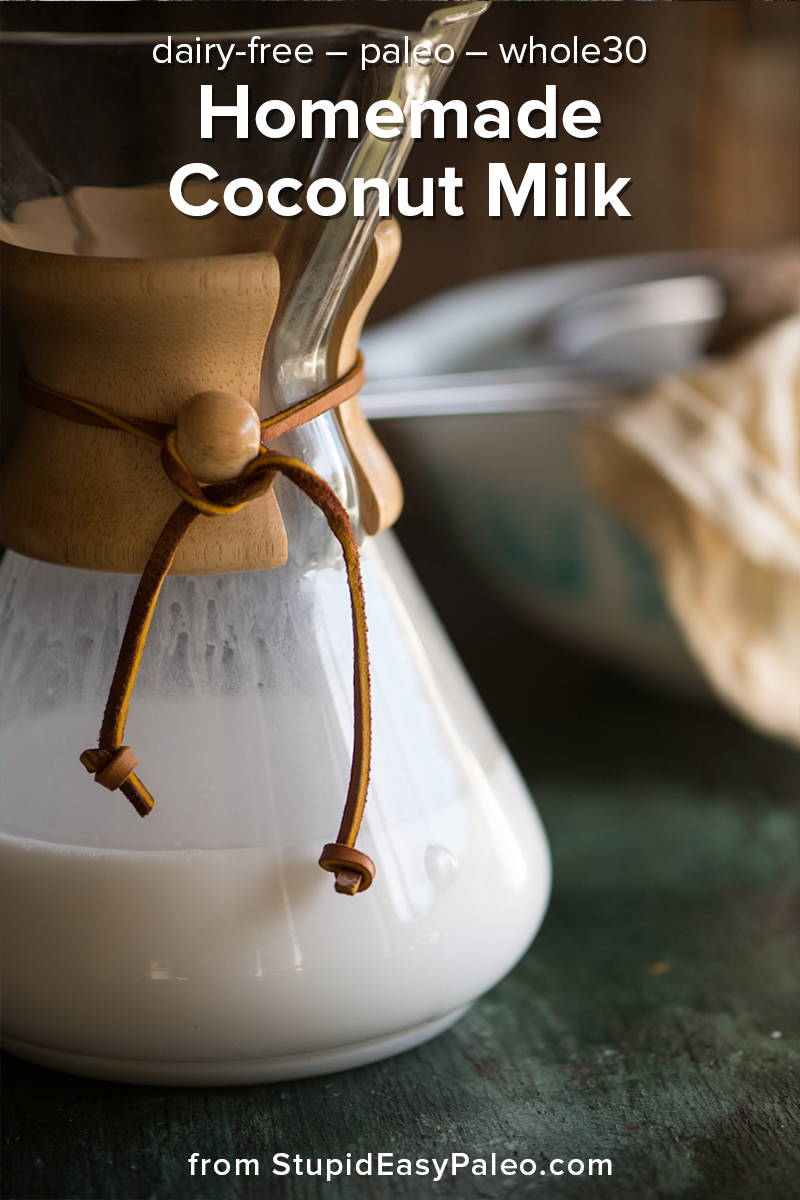 Have you ever made your own homemade coconut milk? Have questions about this recipe? Let me know in the comments section.

How to Make Fire Cider Tonic 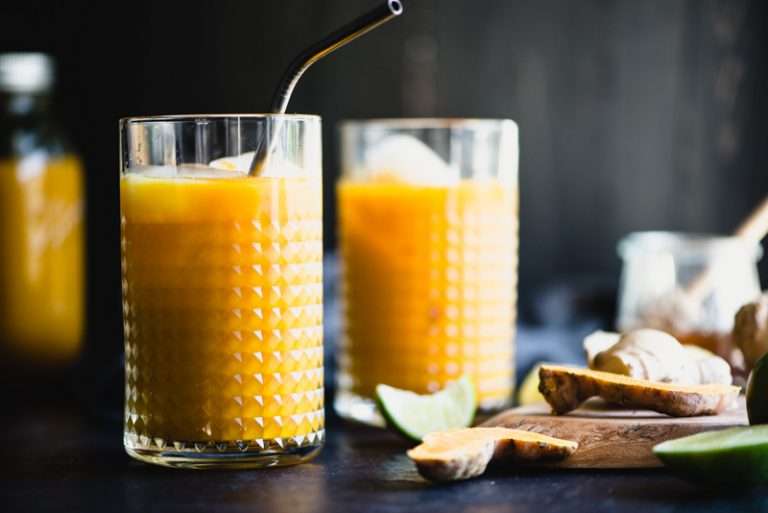 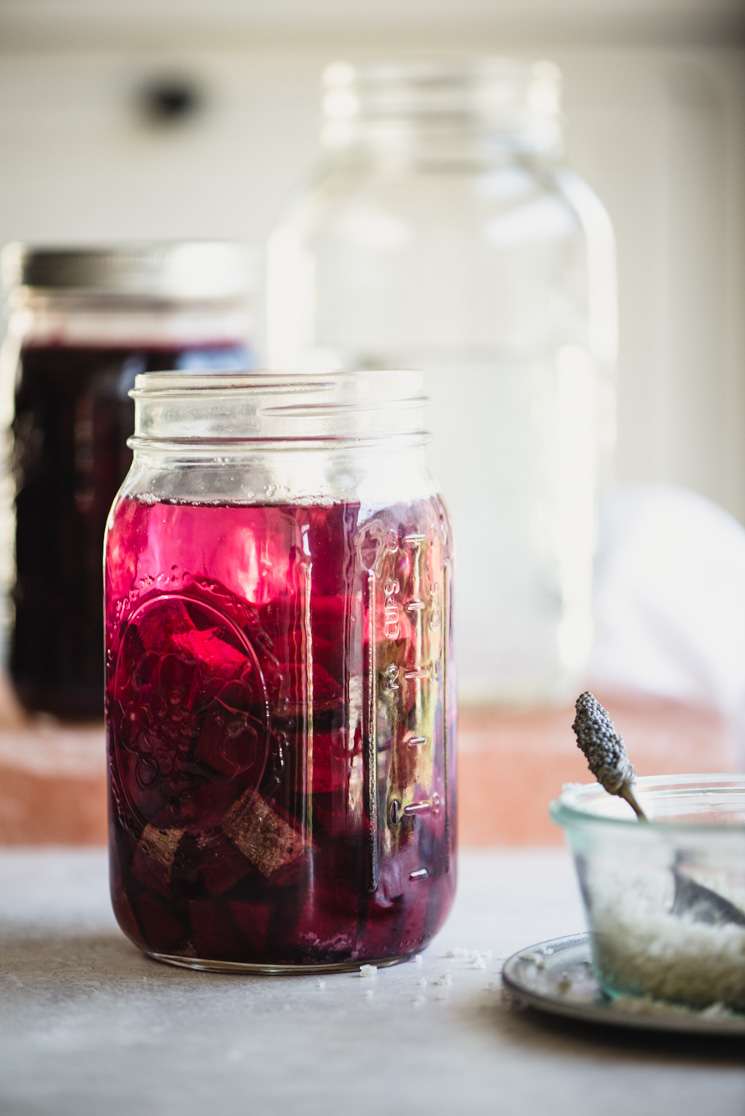 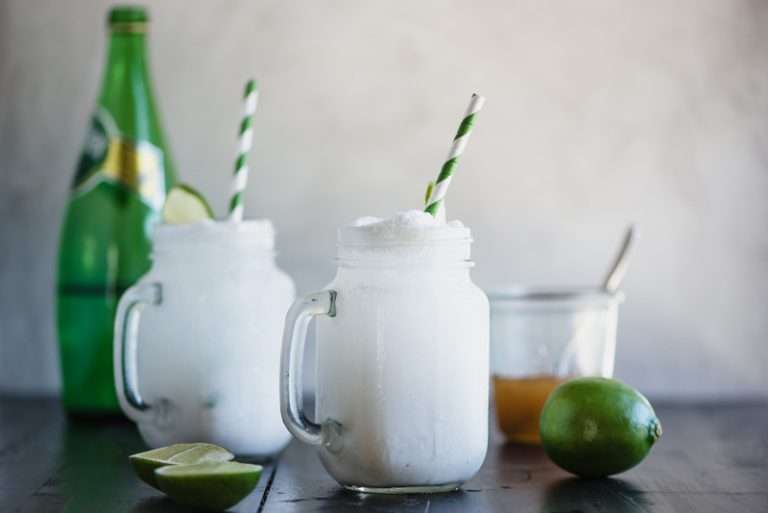