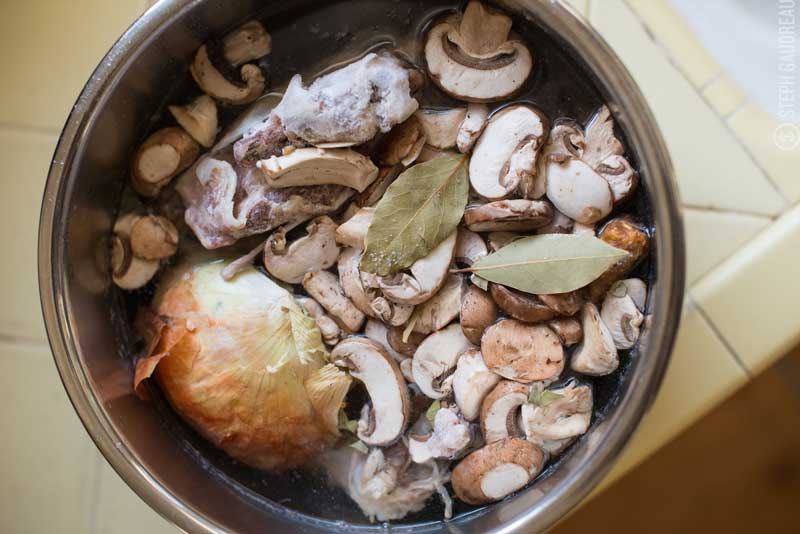 Instant Pot bone broth is a snap to make!

(Don’t have an Instant Pot? No worries. Get my tutorial for making the best bone broth on the stove top or in a slow cooker.)

Why You Should Use An Instant Pot to Make Bone Broth

It cooks with the speed of a stove top pressure cooker but like a slow cooker, produces meats and stews that are tender…plus a ton more.

I’m the first to admit: I was really skeptical about the Instant Pot and resisted getting one for a really long time.

I had a lot of loyalty to my programmable slow cooker, and my stove top Fagor pressure cooker did the job just fine (though, when making broth the whole neighborhood ended up smelling a little funky).

Turns out, since I got my Instant Pot back in February – for a ridiculous sale price may I add – I haven’t used my slow cooker or other pressure cooker once. So yeah, I drank the Instant Pot Kool-Aid, and I like it.

I end up making a batch of bone broth about once a week, and the Instant Pot cuts down on the cooking time but still gives a gelatin-rich broth.

Sometimes on Instagram, I post pictures of my bone broth / soup stock in action, and I always get tons of questions about how I make my liquid gold.

I decided to finally write it all up and make a short tutorial video so you can see how to make Instant Pot bone broth for yourself.

Watch the cooking video for my Instant Pot Bone Broth:

Is Broth Good For You?

Bone broth a great source of gelatin and a traditional food that forms the base of cooking in many cultures. The gelatin in bone broth is widely revered for helping soothe the gut and joints as well a build stronger hair and nails.

Also, bone broth – which is very similar to soup stock – is a traditional food and even contains some trace elements. It’s economical (good for your wallet) and is a way to honor the whole animal.

How I Make My Instant Pot Bone Broth

You’ve got a base with bones, water, and an acid. The acid – something like apple cider vinegar or lemon juice – helps break down the bones a bit faster.

How you dress it up with veggies, spices, and other aromatics is totally up to you, though. I typically add a bay leaf, whole black peppercorns, and the ends I’ve trimmed off carrots and onions.

Don’t take this as a “Steph said these are the only ingredients that can go into your bone broth” tutorial. Rather, consider it a jumping off point to explore other ingredients.

Do You Have to Roast the Bones?

Whether you use raw or roasted bones is totally up to you. I happen to prefer roasted bones over raw because the final bone broth flavor is richer and more complex. It just tastes better to me.

I save bones from whole roasted chickens and chicken thighs in a bag in my freezer. When I have enough, I’ll make a batch of bone broth.

Sometimes, I’ll troll the market for turkey or chicken backs or necks or chicken feet. Just roast them off in a 425°F oven until golden brown, then toss in the Instant Pot.

What Veggies I Put In Instant Pot Bone Broth

The aromatics can be anything from onion, green onion, and carrot to mushrooms and celery. I save trimmings like onion bottoms in a bag in my freezer, too. When I’m ready to make a fresh batch of bone broth, I reach into the freezer, pull out the chicken bones and veggies, throw it in the pot and go.

Lately, I’ve been experimenting with some other aromatics and spices to make a pretty tasty chicken pho broth, so stay tuned for that. 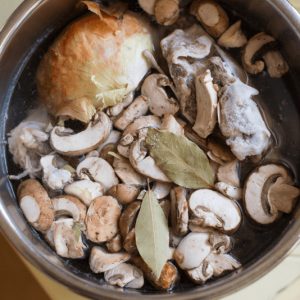 Learn how to make Instant Pot bone broth! In just two hours, you'll have a nourishing batch of soup stock with these simple steps. Bone broth is good for you, rich in protein, and a money-saving way to use vegetable trimmings and chicken bones.

If you don't have an Instant Pot, see my stovetop / crock pot bone broth method.

You can freeze this Instant Pot Bone Broth. I recommend doing that in silicone ice cube trays. (This is the one I have.)

Are you on team crock pot or team Instant Pot when it comes to making bone broth? Tell me in the comments. 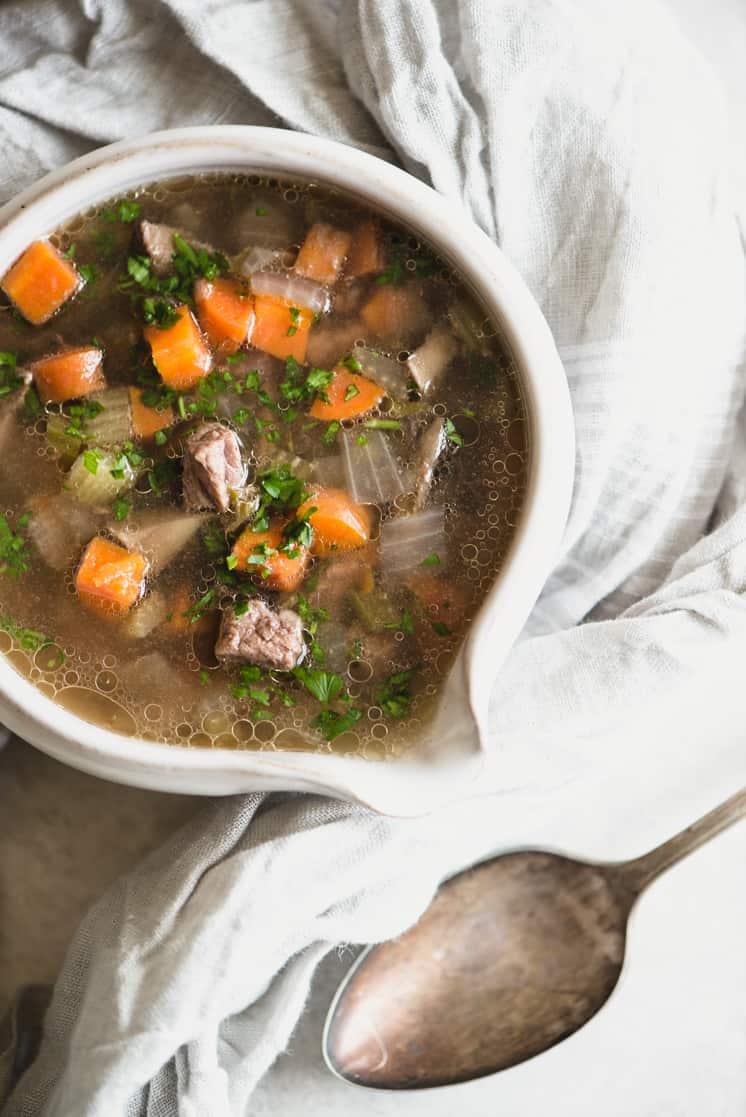 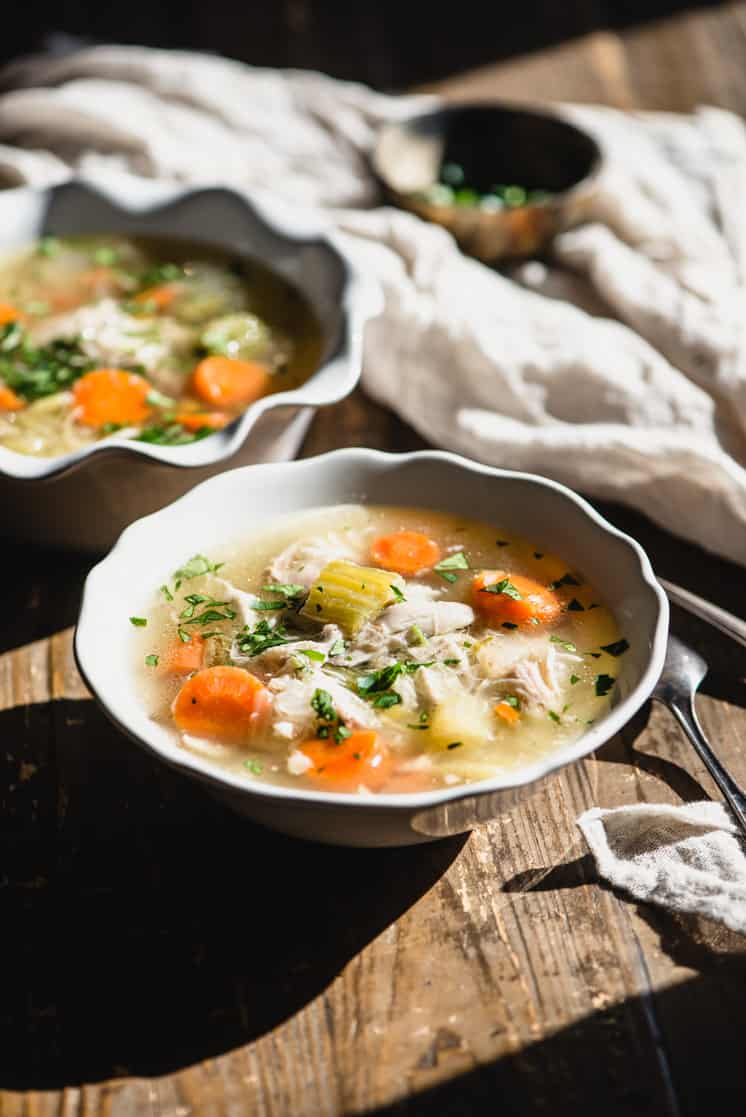 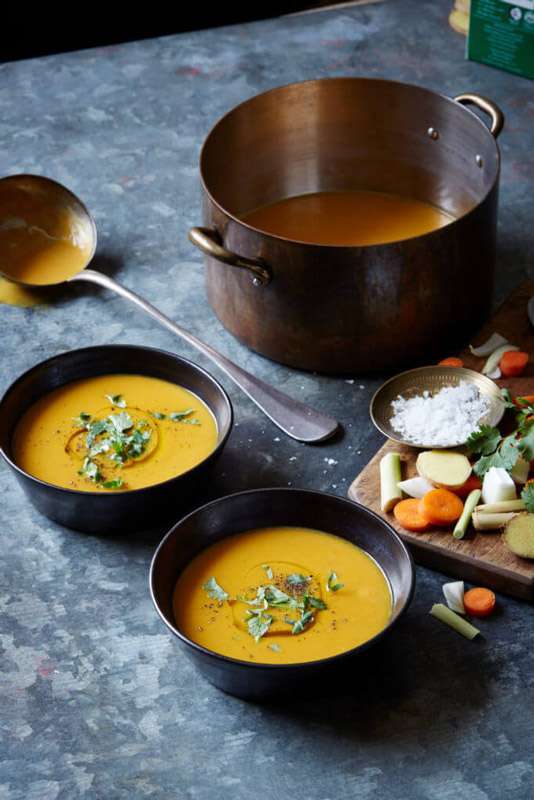