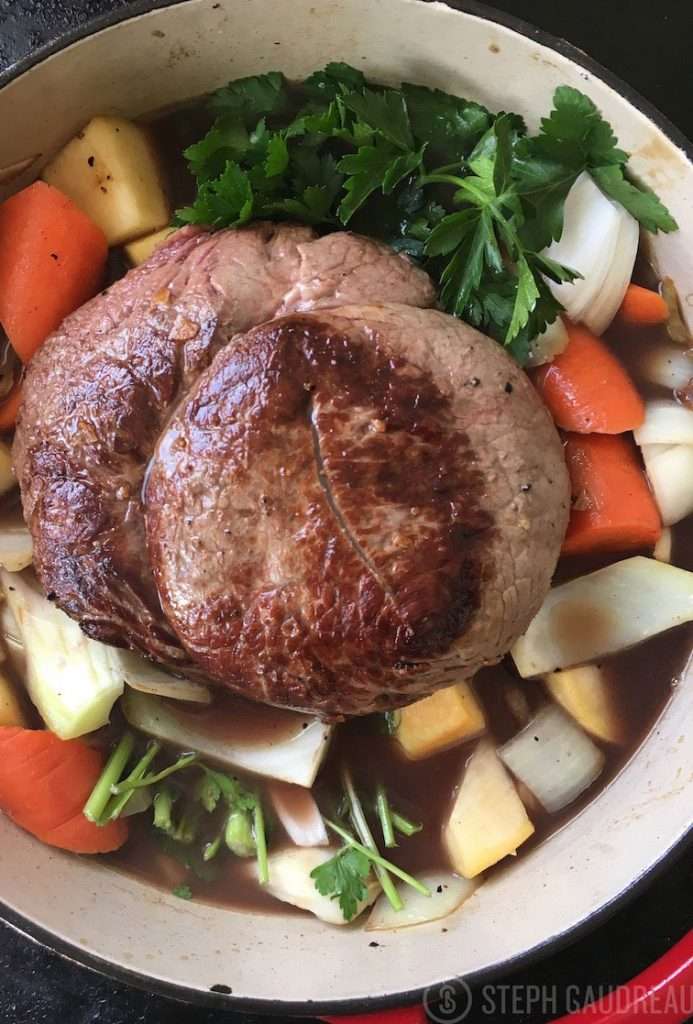 Paleo Pot Roast is comforting, nourishing, and it freezes well. I make it once a week because it’s the ultimate in comfort food. 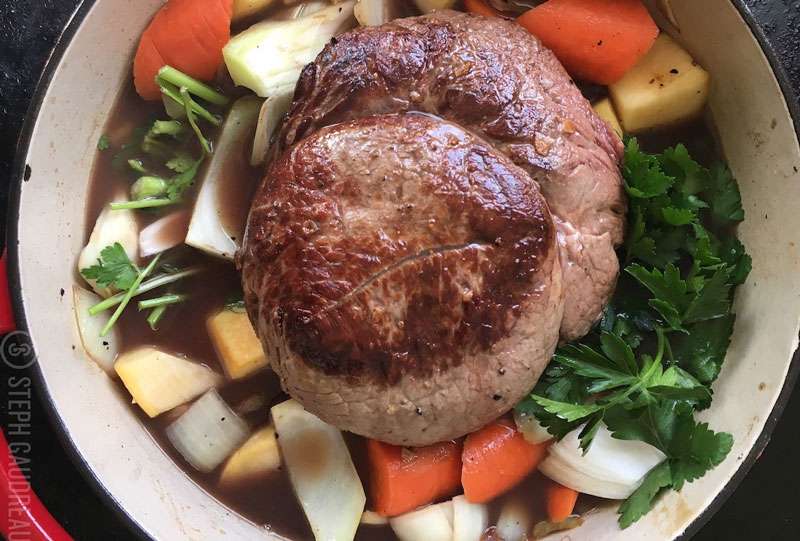 There’s really nothing magic about this other than letting the ingredients cook slowly so the meat becomes so tender and the veggies are soft. In other words, you need a bit of time.

(Now, I’m sure you can do this in an Instant Pot – and I admit to just grabbing one from Amazon while it was on sale – but I haven’t tested this in there quite yet. To adapt the recipe, you’d reduce the broth about 1 cup and cook on Manual / high for about an hour. Let the pressure release naturally.)

My favorite method of cooking a paleo pot roast recipe like this is browning the outside in a Dutch oven, then braising the meat in broth with some veggies, and throwing the whole thing in the oven to bake low and slow. 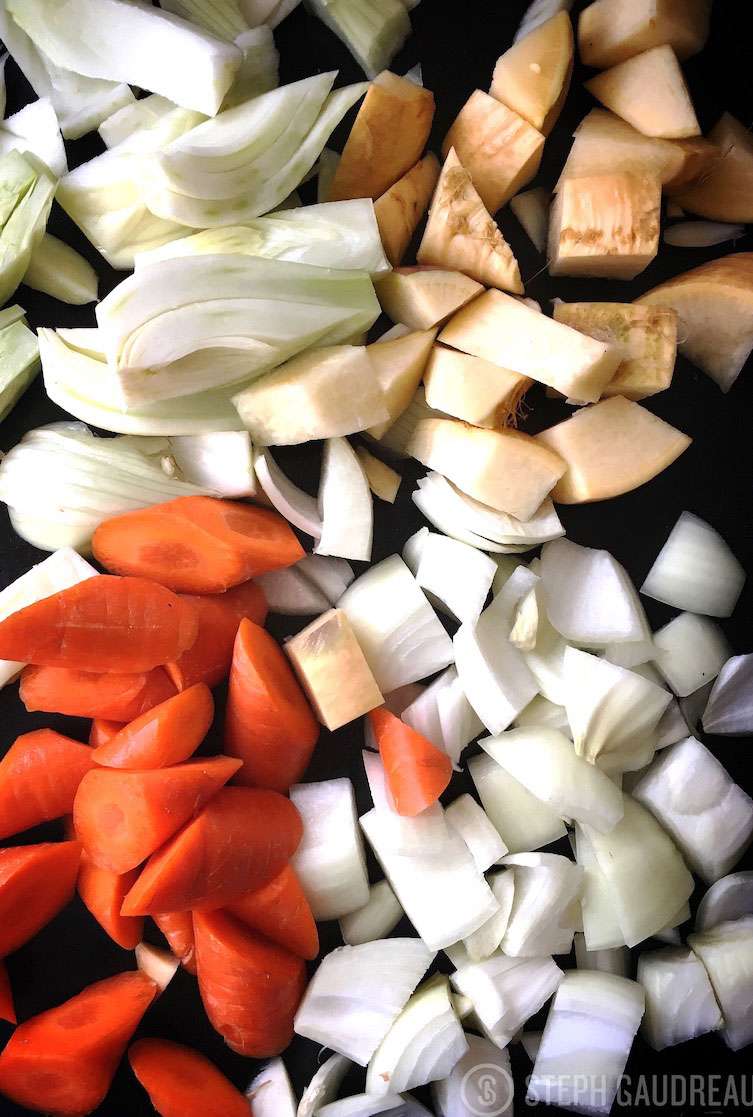 Braising sounds complicated and scary, but it’s really pretty simple. When you braise meat – or veggies – you sear the outside of the meat with dry heat, then finish cooking with moisture. That usually means putting it in a pan, adding some broth, and cooking low and slow until the meat is tender.

Can You Make This in a Slow Cooker?

Of course, you can do this Paleo Pot Roast in a slow cooker, but I find this gives a better result. If you opt for the slow cooker, use low heat for at least 5 to 6 hours. However, it may need more time if you think it’s too tough.

Make sure you have enough liquid in your slow cooker to keep the meat from drying out.

Which Cuts of Meat Work Best for Pot Roast?

I used sirloin tip roast which is usually less tough – though more expensive – than pot roast, a cut which typically comes from the chuck and is less tender. But, use what you have or what’s affordable for you. 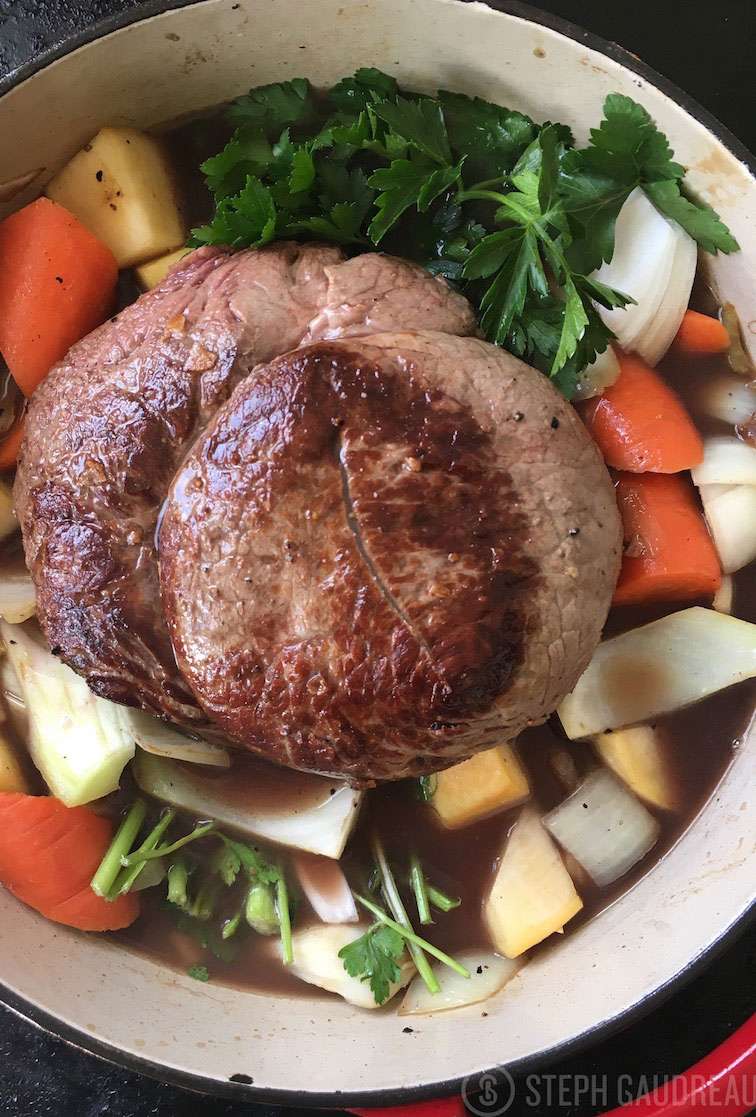 I rustled up some of my favorite root veggies for this Paleo Pot Roast: fennel, carrot, rutabaga, and onion. You could also add potatoes, turnip, parsnip, or any others that you like.

I chopped the pieces pretty large because with 3 hours of cooking time, a dice would result in mushy bits that would’ve disintegrated.

And I got the idea to put whole parsley in while we were watching the new Michael Pollan documentary series, “Cooked.” (We watched it on Netflix.) Hat-tip to you, Mr. Pollan. I just fished out the parsley before serving. 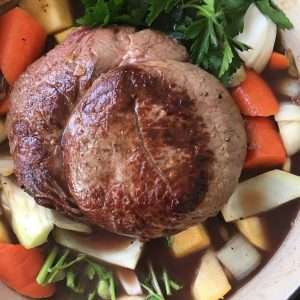 This Paleo Pot Roast recipe is simple & perfect for a weekend. The root veggies and bone broth slow cook with the beef and add a lot of nutrient value. It's gluten-free, paleo, and whole30 friendly.

Did you love this Paleo Pot Roast recipe? Leave a rating and comment below. 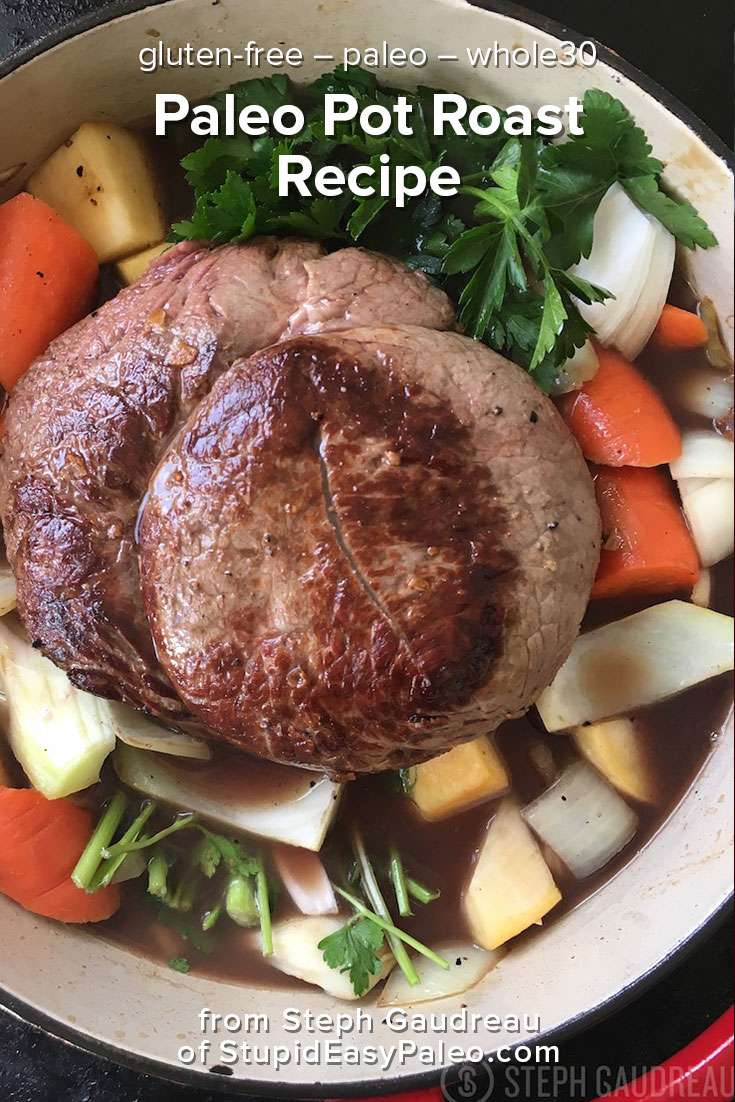 WE BELIEVE… 💪in challenging the nutrition & 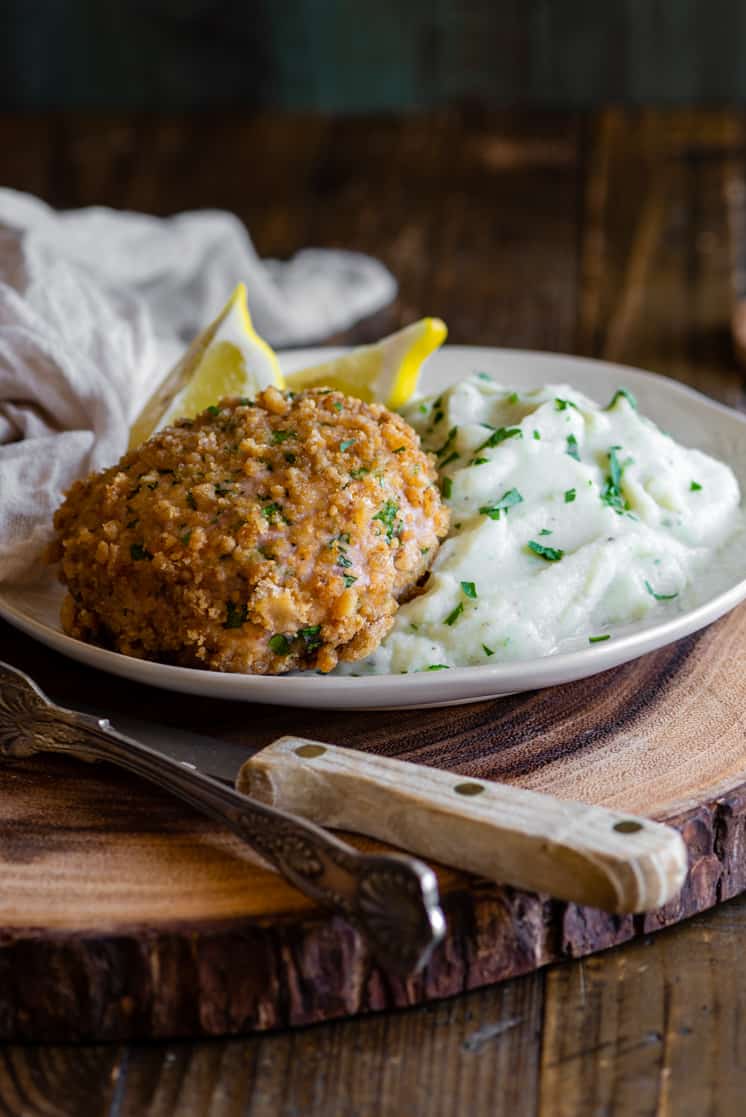 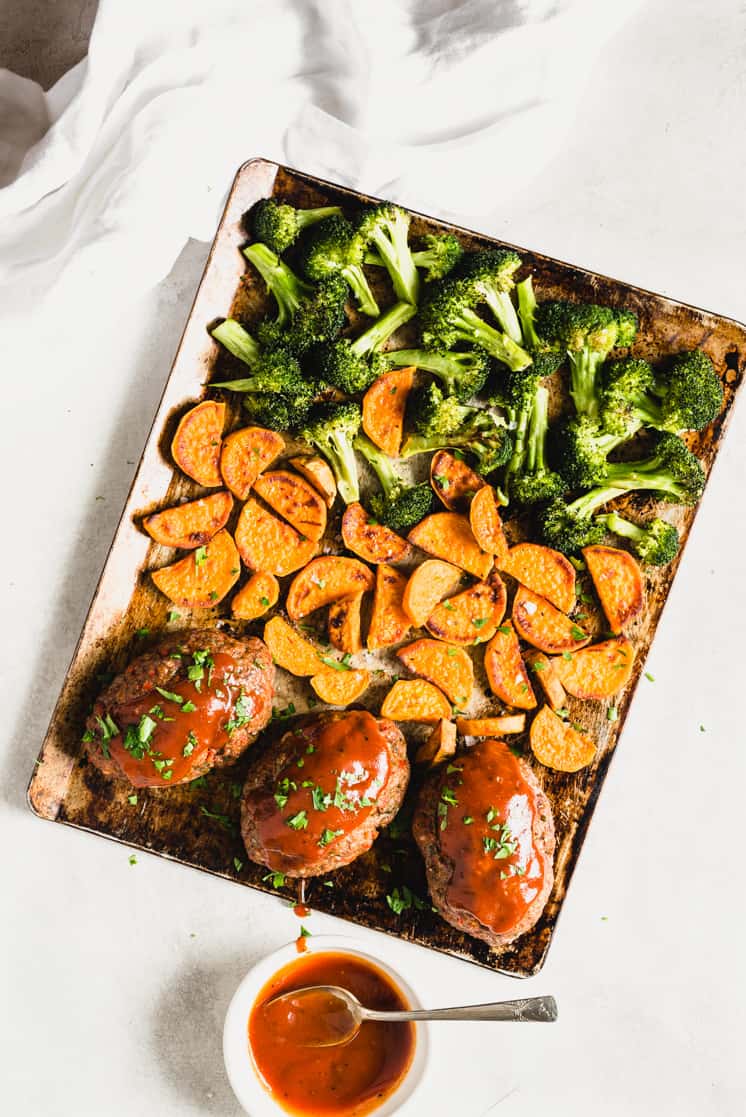 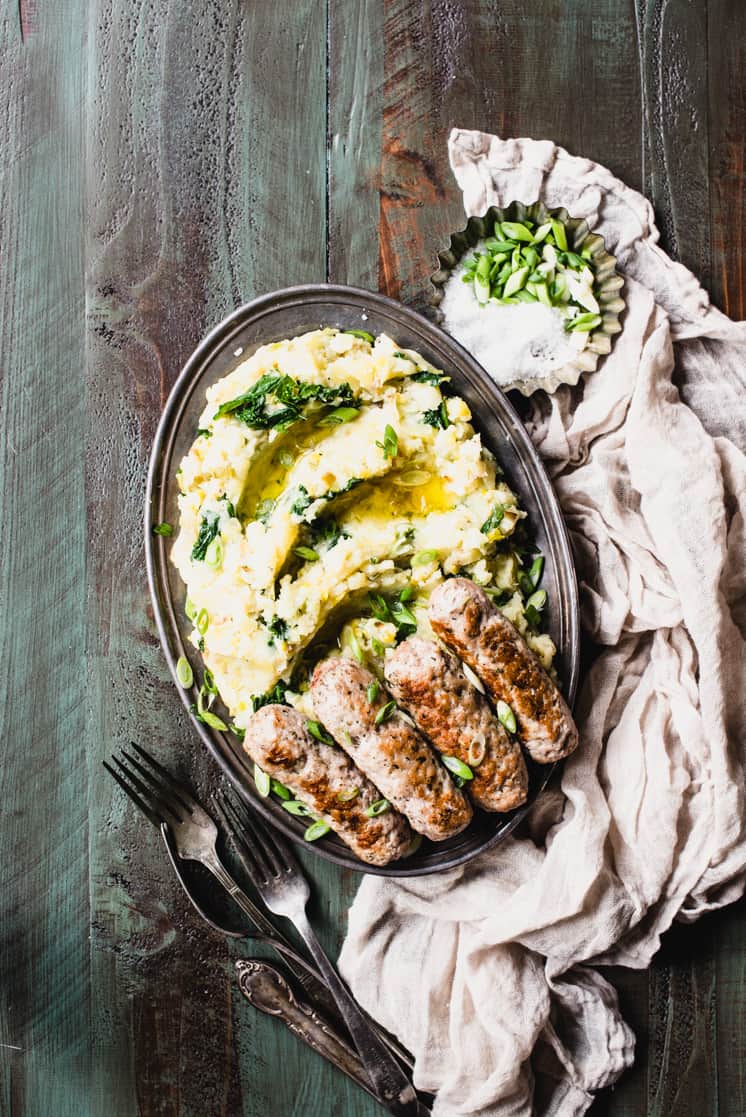 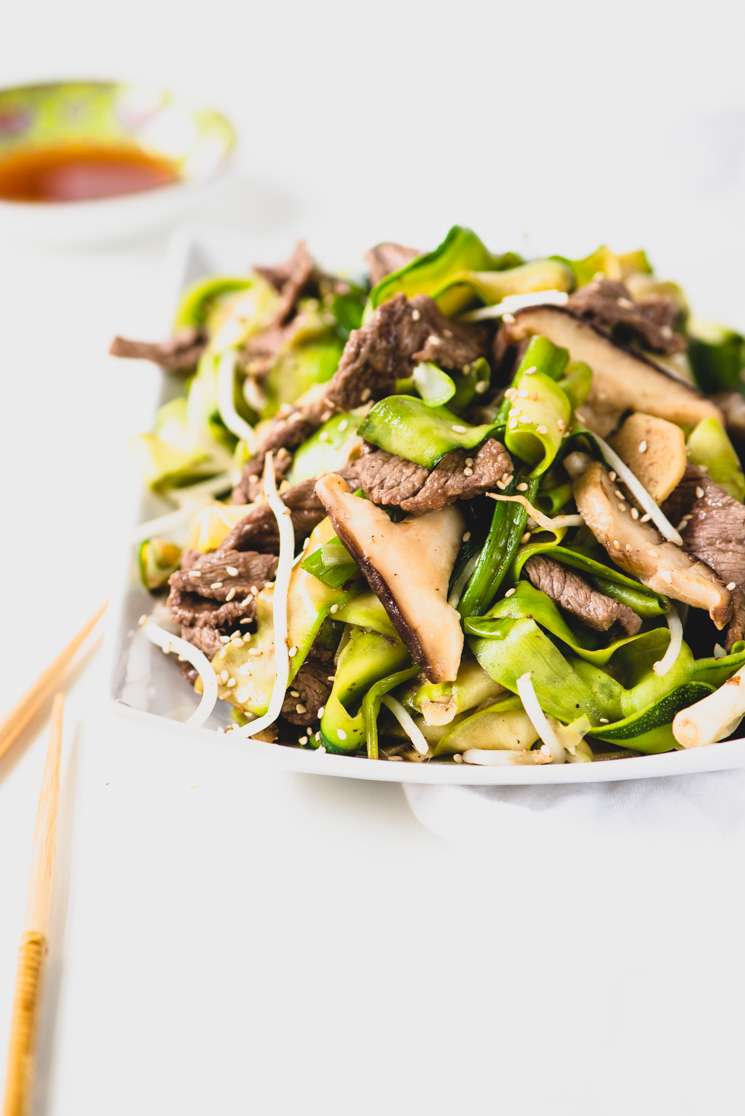