Mind Your Own Body (MYOB)

This isn’t my usual blog post, but I cannot think of a more appropriate time to write it because the problem of body shaming and body obsession has got to stop.

So screw keywords and SEO and perfect titles…this is raw and real.

Earlier today – on the eve of my 2017 Women’s Strength Summit website going live, oh the irony –it’s become abundantly clear, yet again, that there is still much work to do to change this conversation about women’s bodies.

I give you Exhibit A:

Remember, YOU get to define what strong means to you. #HarderToKill

And buried deep down in the comments, came this:

If you came with popcorn and just want the TL;DR…

Body obsession has got to stop. Period. And it starts with you. And me.

Where do I even start unpacking this?

I don’t know Ms. Lehman whatsoever. I considered blurring out her screen name but then, I know y’all would just go look at the Instagram post anyway. She made the comment publicly and it is my public profile, so fair’s fair.

The point of this post isn’t to shame her back or go after her or leave rude comments. In fact, I want you to leave her alone, though I’m hoping she sees this post. This isn’t the first instance of body shaming the world has ever seen, and it certainly won’t be the last.

If you troll, you’re stooping down to that level.

I want you to begin seeing conversations around body shaming like this clearly.

[bctt tweet=”Body obsession has got to stop. Period. And it starts with you. And me.” username=”stupideasypaleo”]

You Can Have Your Opinions…

Seriously, it’s fine that my body is “not attractive” to Ms. Lehman (which is quite fortunate since I’m the one living in it, not her).

Seven, ten, twenty years ago, a comment like that would’ve sent me into a mental and emotional tailspin. I battled with body dysmorphia as recently as 2010, believing that my 130 pound body was fat, deformed…and wrong.

I vividly remember, at the height of triathlon season (middle photo), when the scale dipped to a low of 128. Momentary elation was replaced by the feeling of absolute emptiness. I still wasn’t “happy.” Wow, that’s not how it was supposed to work. 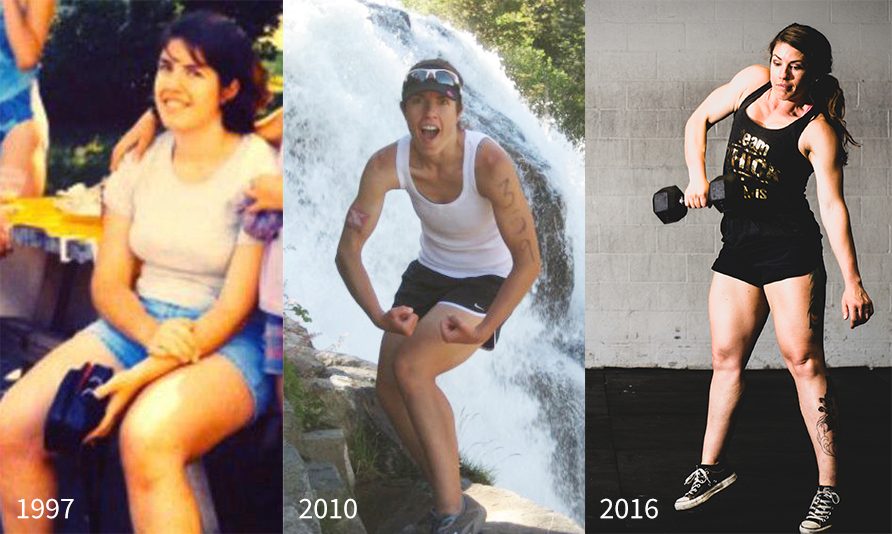 It took a long time, and a lot of work, to be okay with myself. I had to sit in the soup and make forward progress only to cha-cha backwards and then forwards again. The path has seen many failures, but nowadays, it’s pretty common for me not to think at all about the size, fatness, thinness, muscly-ness, tone, wrinkliness, or whatever about my body.

It matters a lot more to me how I feel…

So really, I don’t give a single care what anyone says about my body or if it doesn’t match up with their likes. But I’m lucky to be on the other side.

It’s taken me a lifetime to not need the opinions or validation of others to prop up my slipping self-worth. But here’s my regret….

Many, many women I know and work with aren’t there yet.

And they read hurtful comments, internalize them, and believe that they’re worthless for having big quads or cellulite (hey, thanks for pointing that out…like I didn’t ever notice!) or a weird nose.

And those words become the very fiber of their being, their neurochemicals, their gut biota…

When I started this website, it was purely for funsies. But now, I realize I have a duty and a purpose and a responsibility beyond making recipes.

It’s to speak for women, the vulnerable, the shamed, and the hopeless. The women who cannot, for whatever reason, see that they are beautiful and worthy simply because they are.

(Sometimes I feel like The Lorax, just with less facial hair.) 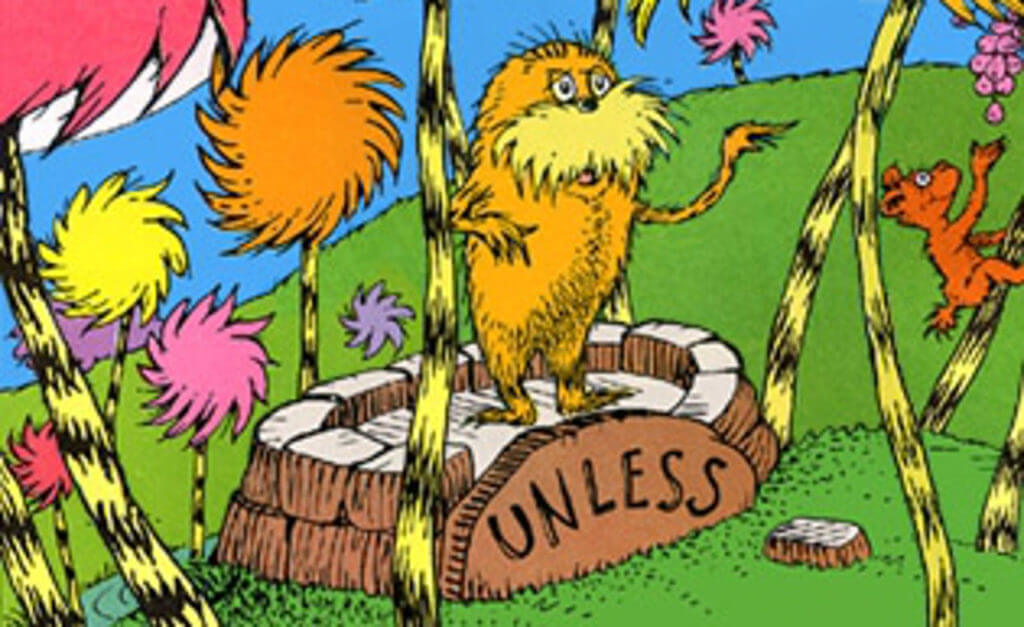 It’s to help women get stronger in body, mind, and spirit so they can latch onto the tiniest, most minuscule shred of self-belief that they are worth it. And then the grip strengthens, and they grow and learn and expand into what they’ve always wanted to be.

“But, Nobody Can Make You Feel Bad…”

Hey look, I’ve read my fair share of Byron Katie and Mark Manson. I get it. I’m responsible for my reactions. (It’s why I’m not mad at Ms. Lehman.)

BUT. And this is a huge but.

We have got to stop believing that words don’t matter.

Insulting, rude, uncalled for comments made across screens instead of into someone’s eyes are like a sick game now. Our social media obsessed world has meshed with body obsession to form the most grotesque of Frankensteins: people who believe their word has no bond, consequences, or repercussions.

It’s a little too much YOLO and not enough, “Hmmm, lemme think about that one first.”

Never in human history has it been so easy to write something only to have it disappear as soon as our notifications slide off the screen. Keyboard warriors have become the modern equivalent of gladiators, duking it out in endless word battles, only the wounds are invisible.

Reality TV and mass media have made it effortless to become consummate voyeurs…now there’s no penalty for spying into your neighbor’s hut or talking badly about their wife’s body hair. The social element of being held accountable, of looking in someone’s face, is gone.

I read in a book (The Shallows, I think) about parents who made their son FaceTime his grandparents if he wanted to cancel their weekly visit. The sheer act of looking them in the face (digitally, anyway) and seeing their disappointment was more visceral than any text could ever be.

Would Ms. Lehman say that to me if we were looking each other in the eye? Doubtful.

As much as I’d like to believe I’m innocent in all this, I’m not. (Remember, I’ve read Byron Katie.)

It’s so easy to get sucked in to commenting on other people’s bodies, to put them down, and to gossip, so I’m doubling down on my efforts to do better. I can only expect to see change in the world when I start with myself.

Let’s See Body Obsession For What It Really Is…

(Hat tip to Neghar Fonooni for stating it much more eloquently than I ever could. She’s going to be talking about it here.)

I’m frankly tired of the “we’re all just biological creatures looking for a mate” excuse. It’s one thing to find someone physically attractive. It’s quite another to spend a good portion on your waking hours obsessed about your own – or someone else’s – body.

Seriously, for one day, I challenge you to make a hash mark on a sticky note every time you talk – or consume media like trash mags or gossip shows – about someone else’s body.

Better yet, keep track of how many times a day you make comments or engage in negative self-talk about your own body. Do it, and send me a comment when you have a number.

I have to wonder…how much is body obsession a way to avoid dealing with your stuff? What else could you do with that time and energy?

How about practice self-care, go to bed earlier, build a business, take a walk, go on an adventure, have lunch with a friend, read a book, cook a meal, plant a garden…I dunno, the possibilities seem pretty endless to me.

Ms. Lehman’s implication is that my body isn’t “toned” and therefore not “healthy” especially since I am “overweight” and have “cellulite.”

(Curiously, I’m also manly because I have muscle? Oh, most unholy of trinities! Body fat, manly muscle, and appearing overweight!)

I could give numerous examples of how low to “normal” (according to BMI? lol) bodyweight isn’t synonymous with “health” or vice versa. It’s just common sense.

We have got to stop elevating bodyweight to this godlike status or worse, synonymous with a person’s worth. Are we really that shallow and jaded? It’s not a be all, end all.

For someone like me with a well-muscled frame, it’s an even more misleading metric. In case you haven’t yet, get rid of your bathroom scale. Now. Go. Throw it in the trash can. I’ll wait.

The Double Standard is Real

Now, I know from conversations with men in my life that body image / body shaming is real for them. It happens, it worries them, and it hurts them, too.

But I need you to get real woke to something right now:

The kind of body shaming and body obsession perpetuated against women today (often by other women) is a very real form of internalized misogyny.

Yes, I just went there.

Never before has it been harder to be a woman with a body which is unfortunate because that’s roughly 51% of the populace.

We’re either too “manly” (hat tip, Ms. Lehman), too buxom, too skinny, too fat, too prude, too loose, too opinionated, too submissive…I mean, it just never stops, does it?

Most of Ms. Lehman’s comment was purely opinion. Again, she’s entitled to it, though it didn’t add anything productive to the conversation…just another drive-by shaming. But the most concerning part to me was the very end:

“Being able to lift weights and look like a man doesn’t make a woman equal with anything.”

We’ve got to develop awareness when it comes to internalized misogyny…even within ourselves. We have to hold ourselves to a higher standard.

To be clear: I don’t lift weights to look like a man, be like a man, or strive for equality with men.

I lift weights because I love it.

I love feeling the resistance against my body. It keeps my mind sharp and makes me pay attention, focusing on the present.

I love the feeling of accomplishing something I maybe didn’t think I could.

I love the mental, physical, and emotional challenge.

I love how it makes me feel alive.

And I realize, it’s not for everyone. Not everybody loves those things, and that’s fine.

You do you, dude(tte) and I’ll keep doing me. Things tend turn out better that way, anyway.

This is it: Your time, and mine, to do better.

To hold ourselves and each other to a higher standard…

To continue this conversation with friends and family…

I’d love for you to watch this year’s Women’s Strength Summit (it’s free), so you can hear more about issues just like this one.

Click here for your free ticket to the 2017 Women’s Strength Summit.

Sometimes, the only way out is through…

…through the awkward conversations and dealing with our own stuff and having more questions than answers.

I hope you join us.

And if all else fails, just remember: MYOB.

Pin this right now to help change the conversation