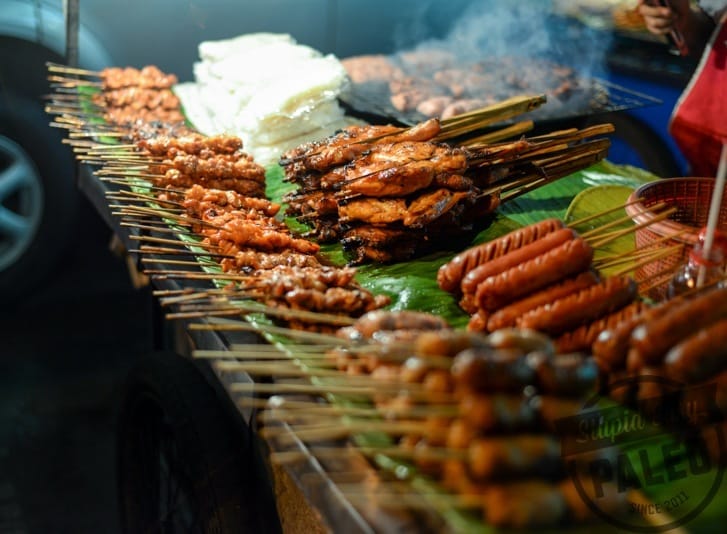 A couple months ago, Nick Massie (better known as Paleo Nick) asked me if I wanted to go to Thailand on a culinary adventure. It didn’t take me long to jump at the chance to check another country off my travel bucket list. As type this, I’m lying on my fold out bed on the overnight train to Chiang Mai…my first chance to be horizontal in about 48 hours. It feels fantastic except my body’s trying to decipher which day it really is, but the jet lag sort of fades to the background as the food and sights and sounds of this trip fill my senses.

If you’ve ever seen The Hobbit: An Unexpected Journey, you’re quite aware—and probably fond—of the scene where the troop of twelve Dwarves tumble through the door at Bag End in pairs and trios. The early part of our journey has been quite the same. My trip started on Sunday night when I left San Diego along with two others from our group. After a quick flight to San Francisco, we were joined by four others, expanding our merry tribe to seven. 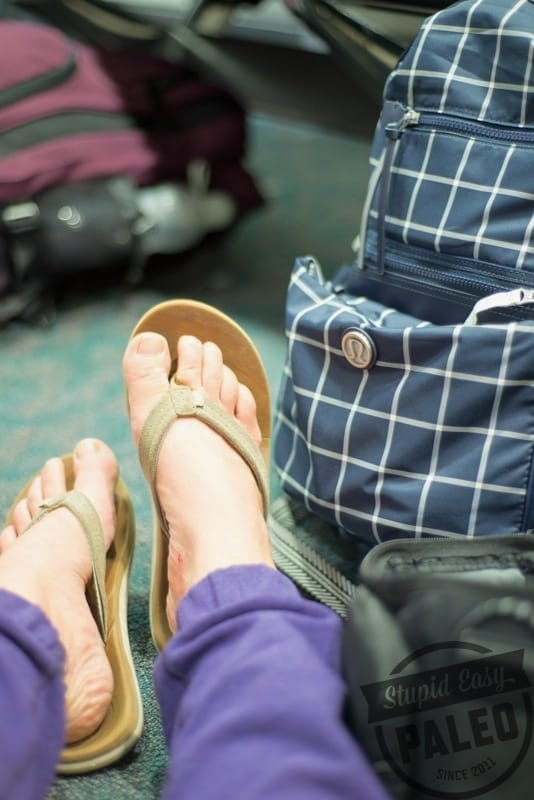 We tucked in for a very long flight (all told, 13-1/2 hours I think) to Taiwan, accompanied by some epic turbulence and binge-watching every tv show on the in-flight entertainment. Many hours later, we touched down in Taipei, picked up another member and boarded another flight to Bangkok. That’s a total of twelve, if you’ve been counting!

Once there, we greeted another three folks flying in from all over. Upon exiting customs, my hunger got the best of me so I pulled up to a little booth and snagged some fresh spring rolls and a box of pork sautéed with rice noodles and veggies for about 130 baht (roughly $4).

Now, I’m sure you’re probably wondering what / if / how I’m going to “keep it Paleo” when I’m in a country renowned the world over for it’s culinary delights. How will I know what they put in the sauce? What kind of oil do they cook with? Don’t I know that rice isn’t Paleo?!

My simple answer to this is that on a vacation that will come once in a lifetime—unless the universe has other plans—I’m going to enjoy the noms. Food is such a strong part of any culture, and to deny myself the chance to experience this beautiful country, I’m not staying strict Paleo when I’m here. I know there’s sugar in the sauces, it would be absurd for me to ask a street vendor about cooking oil, and that my body reacts fine to white rice because I’ve tested it. For more on my take on eating Paleo while traveling, click here.

Once we gathered everyone up, we stuffed ourselves into the train from the airport right into the heart of Bangkok and made a quick transfer until we were right out front of CrossFit BKK. Henrik and Nick arranged for us to do a Paleo seminar, so we tumbled in the door, set down our bags and started talking. There were some really great questions posed by the audience, and I really loved how we talked about adapting Paleo based on Thai culture and food availability. 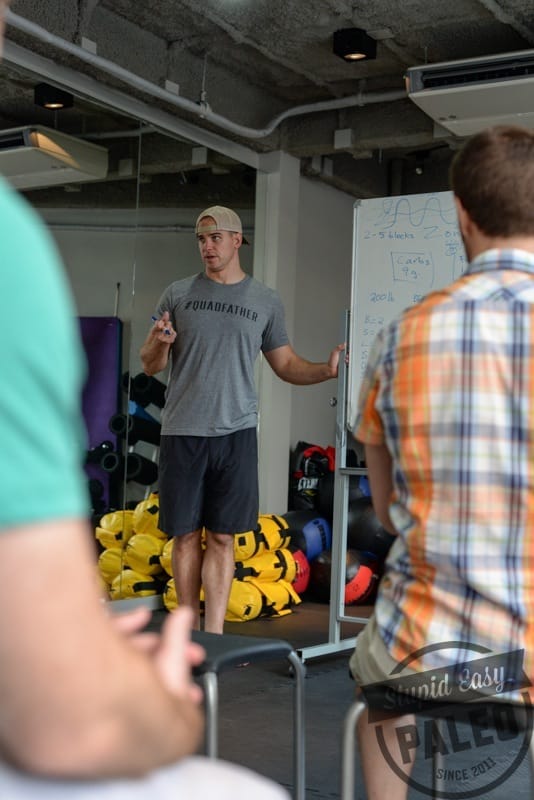 Our answer: Just eat as much whole, unprocessed, nourishing food as possible. This isn’t a quick-fix diet. Instead, it’s a framework for choosing the best food you can a majority of the time for the rest of your life. After the seminar, CrossFit BKK was kind enough to offer our tribe the option to do a workout or to just shower for the first time in about 36 hours which I quickly took advantage of. Their facility is pretty rad with both an indoor and a much larger outdoor rooftop training area. If you’re ever in Bangkok, hit them up!

From there, the afternoon was wearing on so our now-expanded group of fourteen traipsed to the train station via another metro… 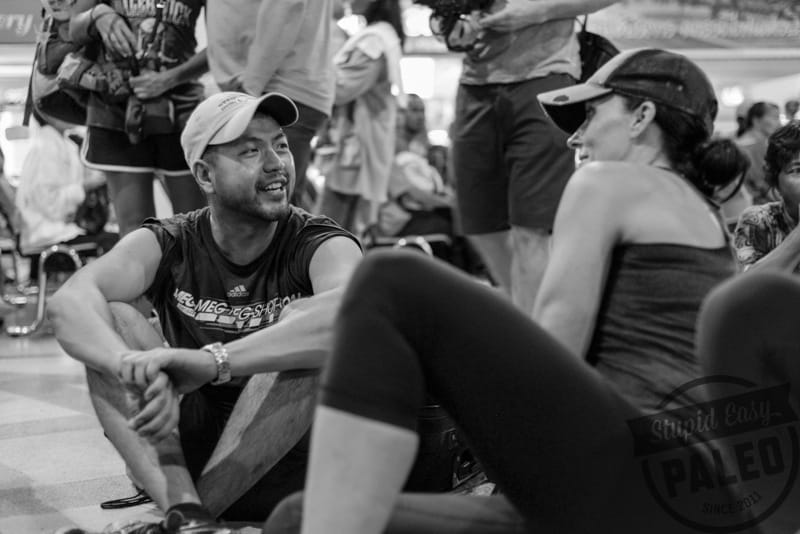 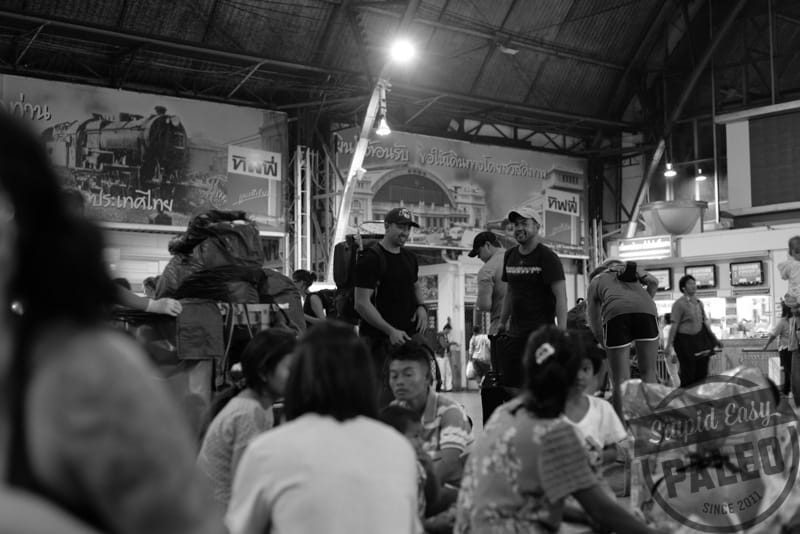 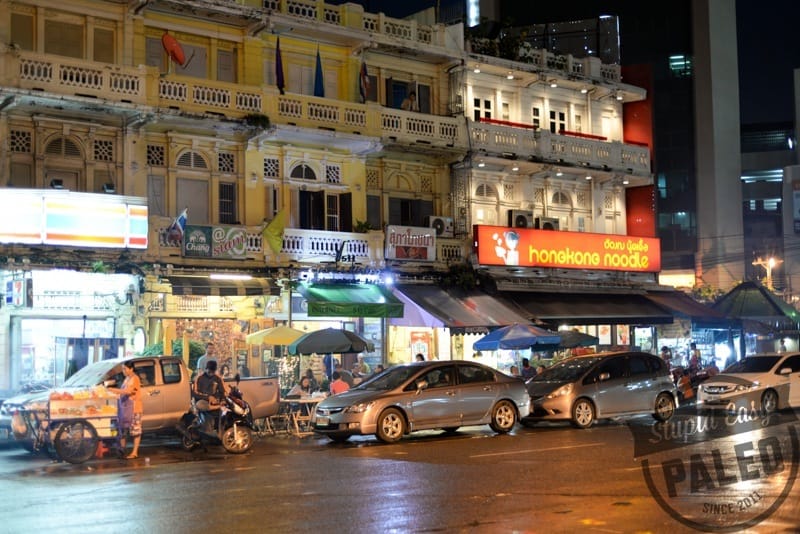 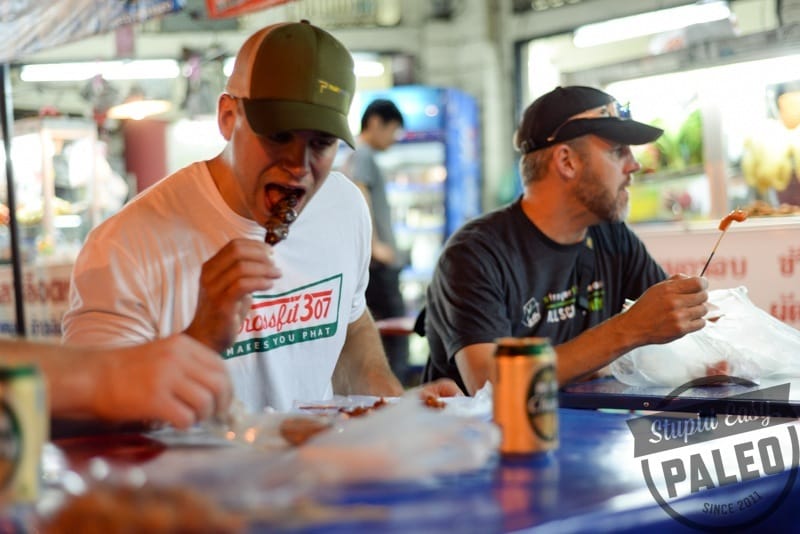 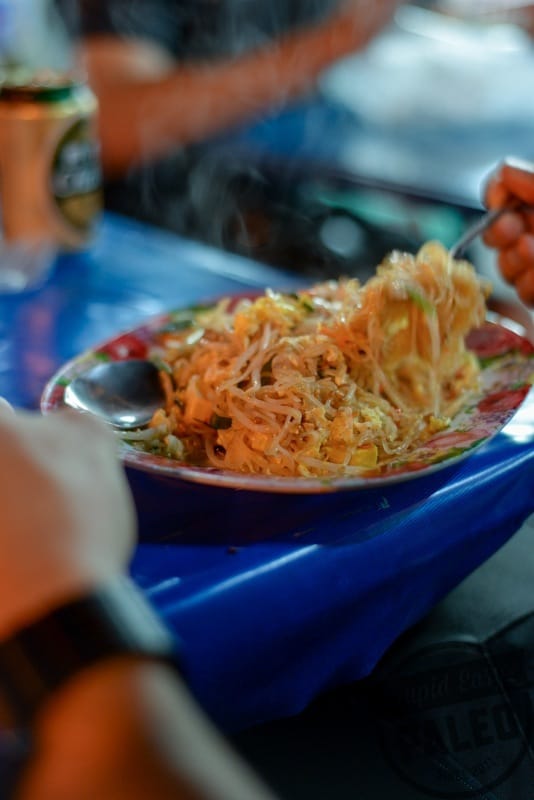 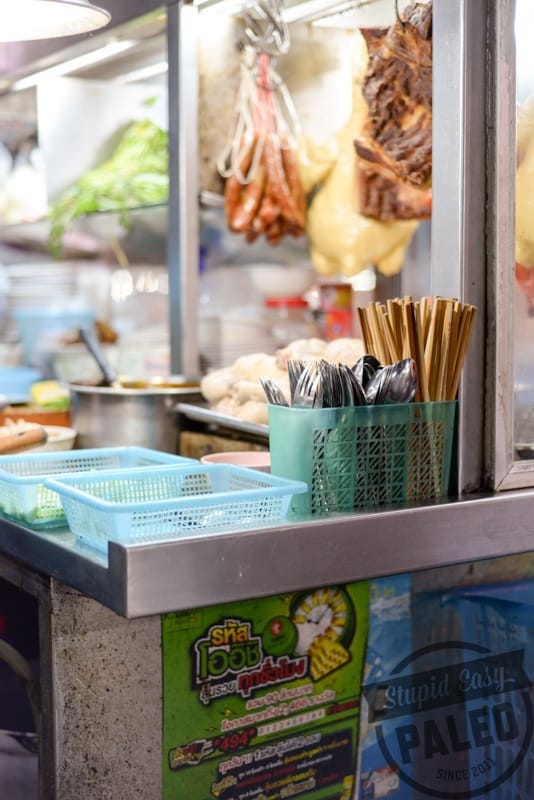 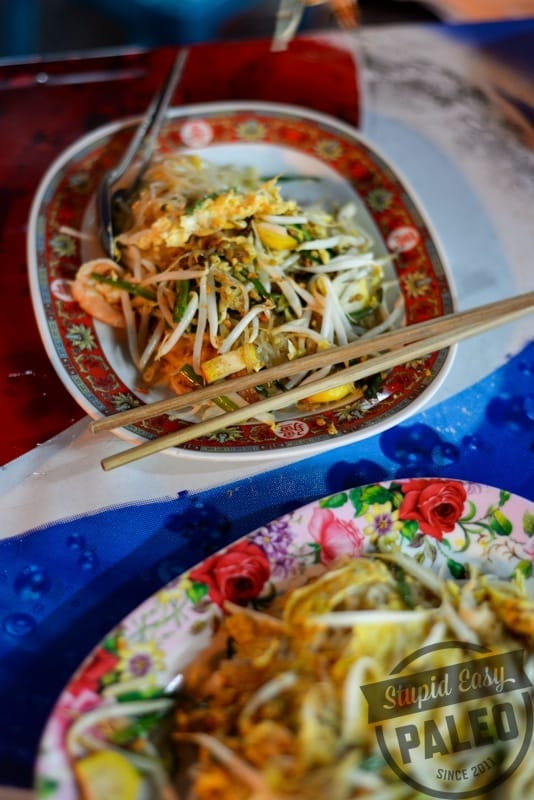 With our bellies full, it was finally time to board the overnight train to Chiang Mai. It looks circa 1960s but it’s clean and functional despite it’s age. It wasn’t long after we pulled away from the station that it was impossible to keep my eyes open…for about 6 hours. 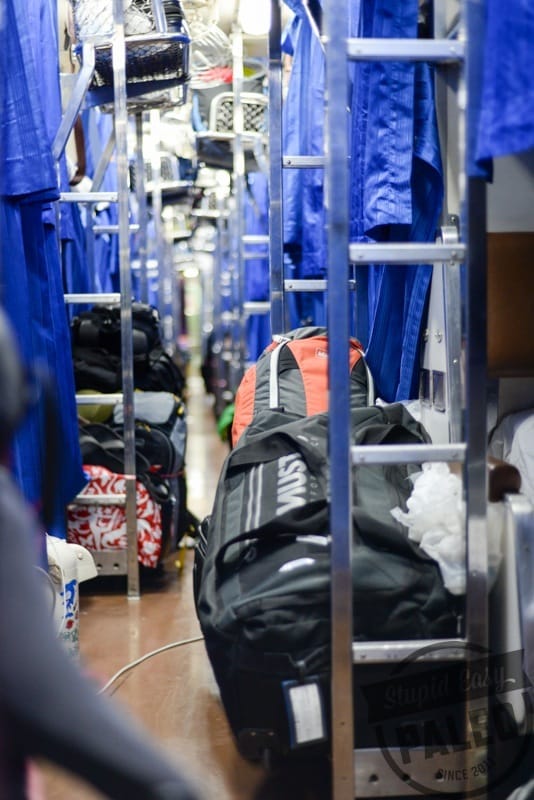 True to form when I travel, I’m struggling to adapt to the time change. Appearances tell me everyone else is asleep right now as the shiny striped blue curtains are pulled across virtually every sleeping berth. It’s about 2 am, and we’re not quite halfway there.

As I gaze out the window, I can make out bits and pieces of what’s out there in the darkness: the moonlight glinting off the train tracks and silhouettes of palm trees going for what seems like eternity between towns. Kids sitting three to a motor scooter as they laugh and speed down a side street and people eating at a roadside cafe in the middle of the night. Gorgeous temples with intricate adornments. Roads that look like American freeways complete with green road signs with white lettering. If the writing wasn’t in Thai, I’d think it could be in Miami.

Every station we roll through has its own unique character. Phitsanulok was quite expansive with folks sleeping on hard wooden benches women setting up food stalls in the middle of this ebony dark night. Sila-At was deserted except for one man standing in the middle of the platform with his arms folded across his chest.

The train whistles sounds and fades into the black as we approach yet another town. It lumbers and lurches in what seems like a rhythm and lulls me back to sleep.

Stay tuned for more dispatches as we reach our final destination: Chiang Mai.

WE BELIEVE… 💪in challenging the nutrition & 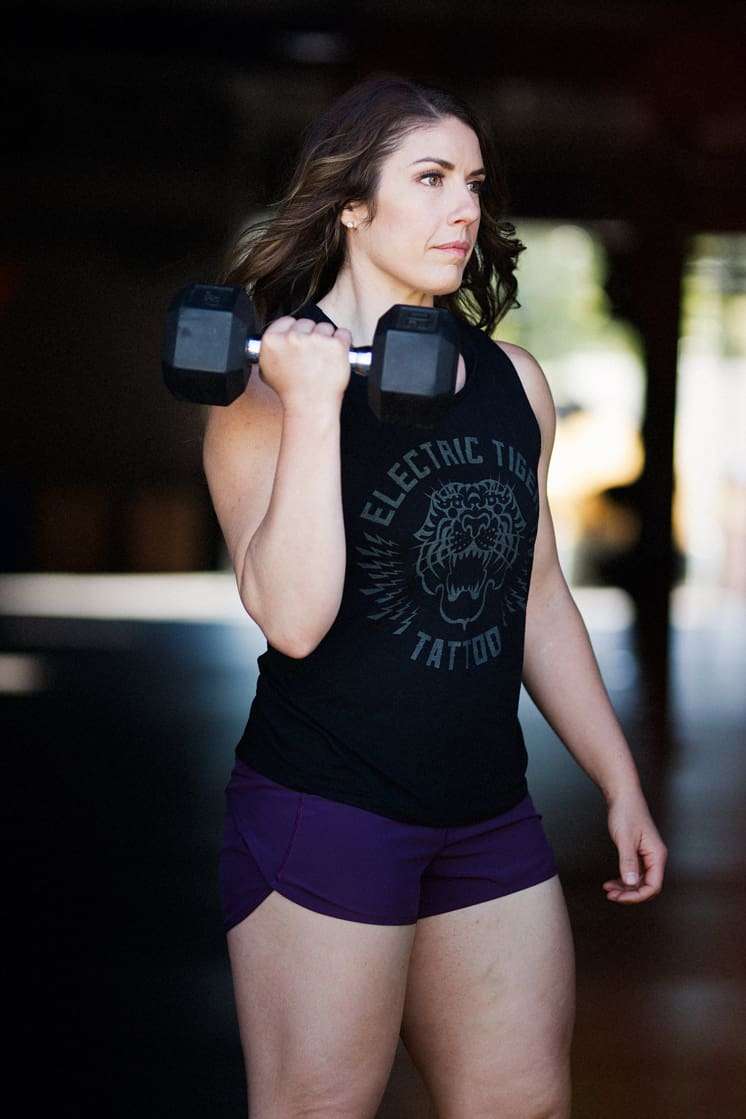 Empower Your Mind – Pillar of Health #4 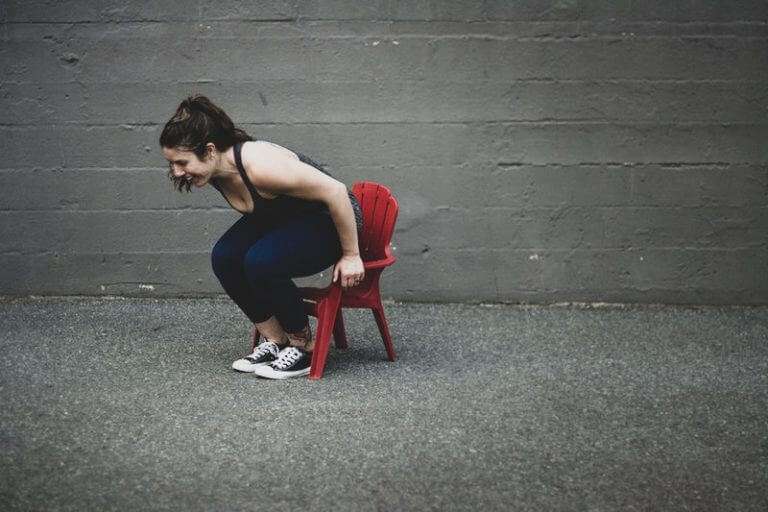 Body Neutrality: Why It’s Okay to Not Love Yourself All the Time 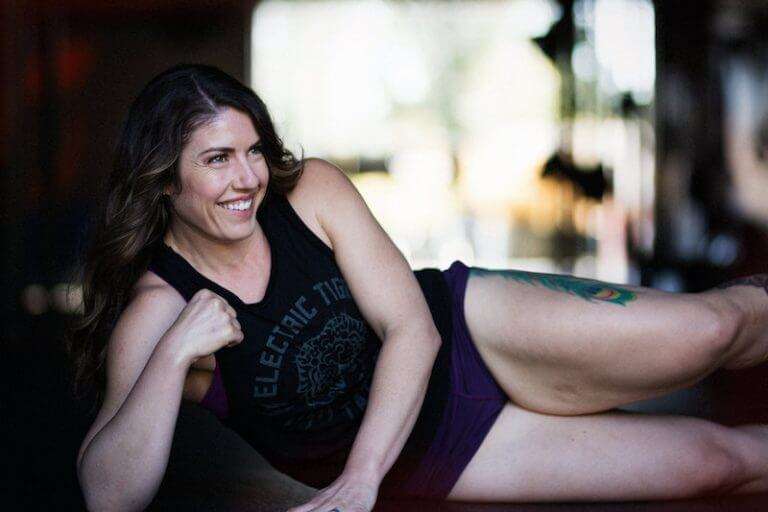 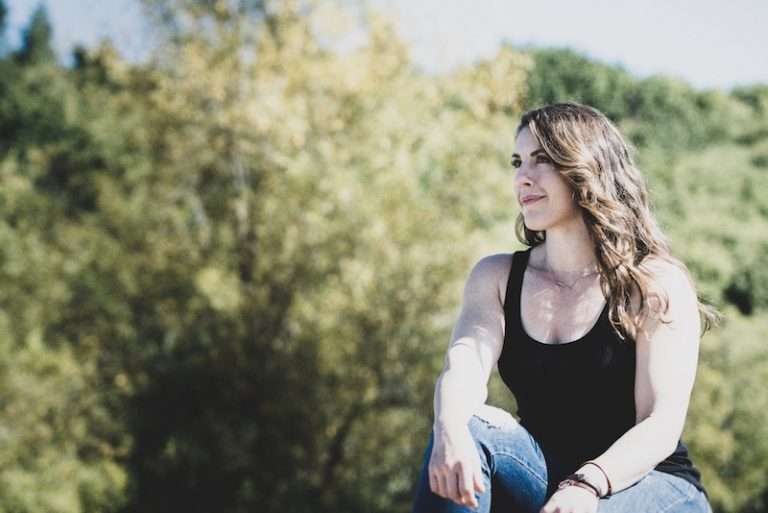 How Dressing for Your Size is an Act of Self-Care