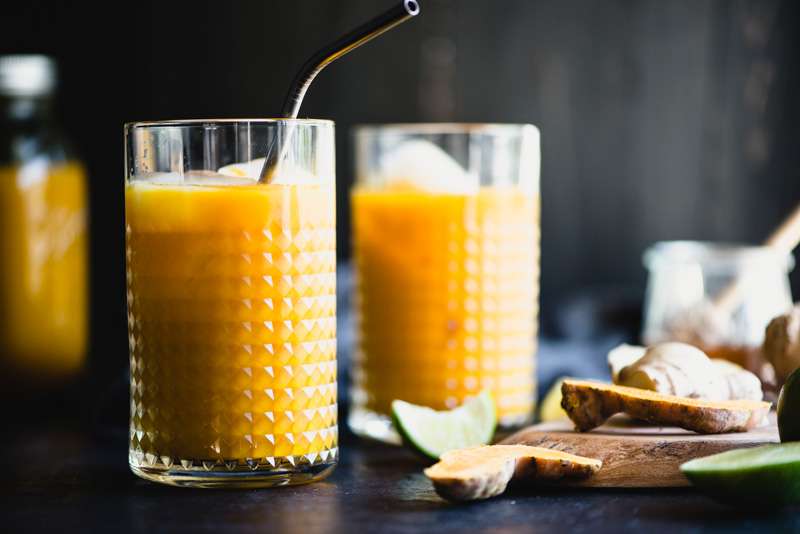 Turmeric Root Tonic is a fantastic way to stay cool this summer. 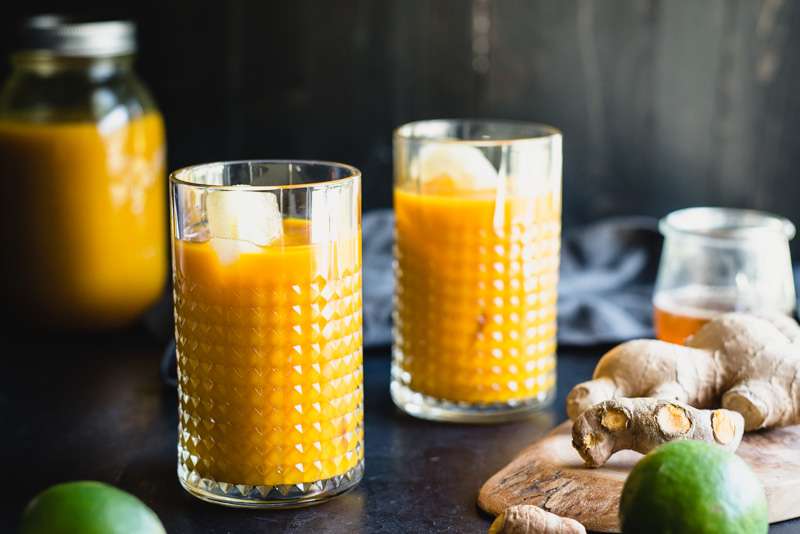 This super simple drink is a snap to make, and has just four main ingredients. In fact, you already probably have most of them in your pantry already! In this post, you’ll learn why turmeric is a star in the kitchen. And, I’ll show you show easy it is to make this Healing Turmeric Root Tonic. We keep a batch in the fridge during the hot weather and sip on it here and there.

When I went to Bali in 2011, I was introduced to a turmeric drink called jamu. This recipe is based on jamu, a lovely tonic that’s very common on the island. 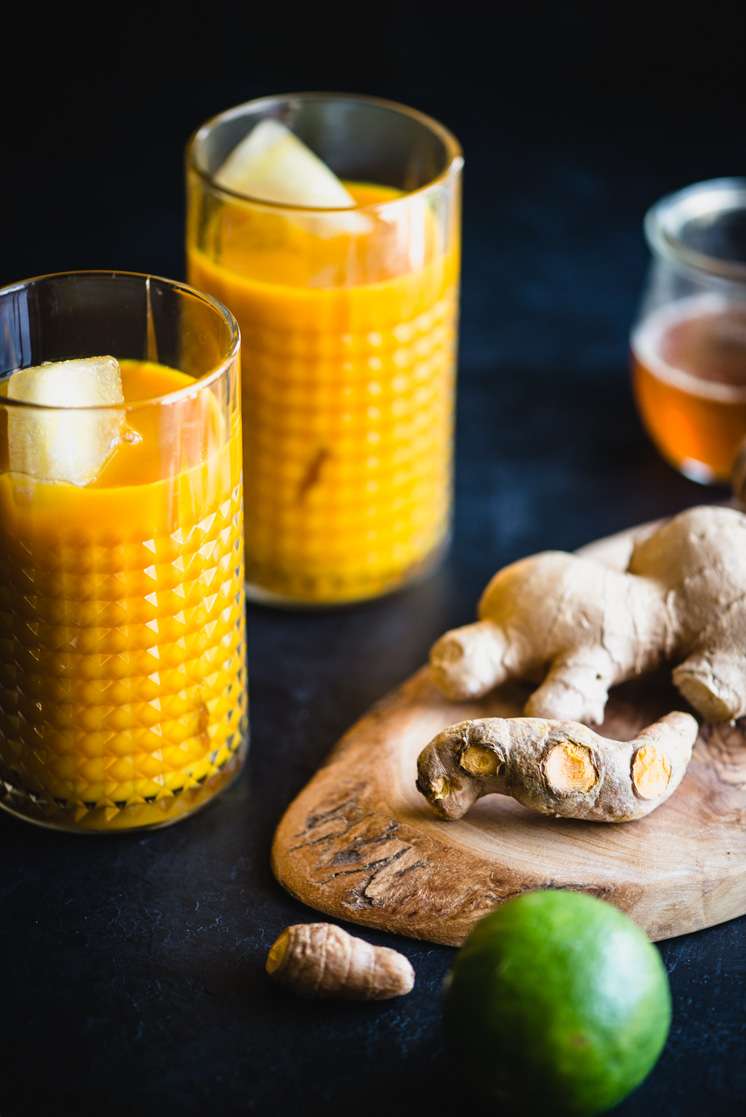 I prefer to use fresh turmeric in this recipe, but you could probably use dried if you experiment a little. Just know that dried turmeric is very potent.

One other caution when working with turmeric: It stains everything. Don’t chop it directly it on marble or granite countertops or get it on your favorite shirt!

In this kitchen, turmeric root bring an earthy, bitter, and pungent flavor. Don’t be turned off by that. It’s all about balance! In this recipe, I paired the turmeric with the sourness of the lime and sweetness from the honey to tame the sharp flavor of the ginger.

You’ll find turmeric as a main spice ingredient in many types of curry (like my Leftover Turkey Yellow Curry) and as the bright color in golden milk.

Turmeric’s most widely known compound is curcumin. It’s a deeply colored plant pigment that appears to have anti-inflammatory and anti-oxidant effects. 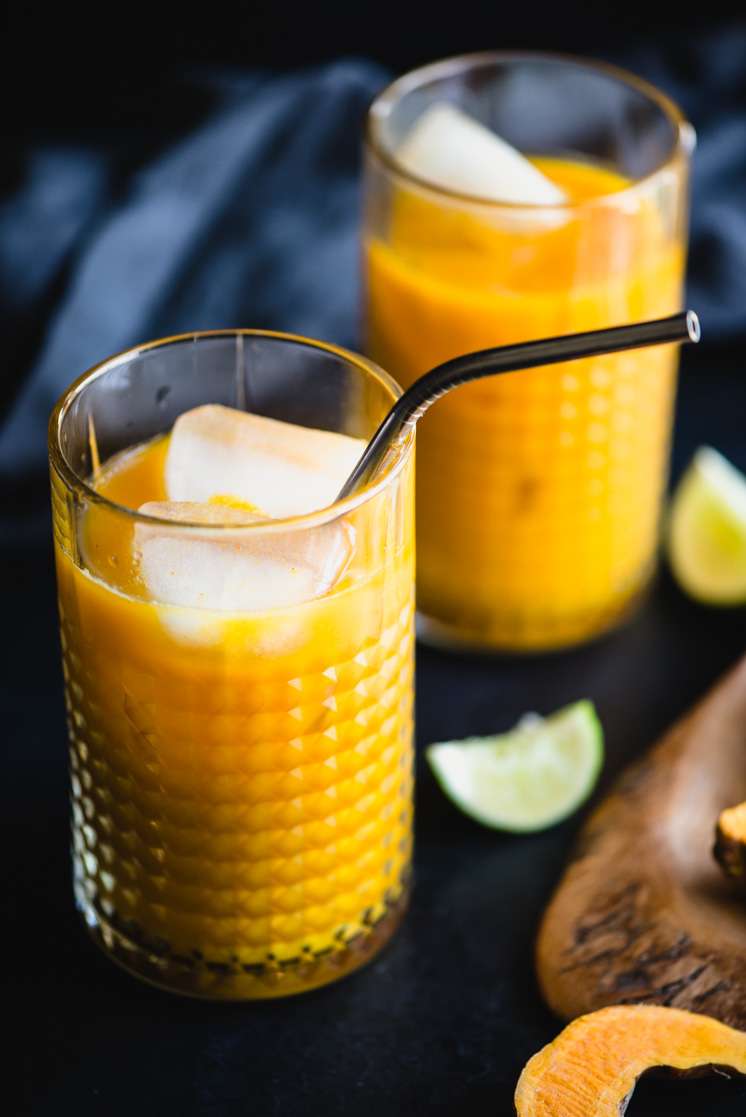 Curcumin is fat-soluble which means its best absorbed when consumed with fat, like the coconut milk in a curry. The amount of curcumin in turmeric root is pretty small, so higher doses require supplementation. Check with your health care provider before taking concentrated curcumin supplements; there are some cautions against using it when pregnant or if you’re on certain medications.

For best bioavailability of the curcumin in turmeric root, it’s recommended that you add black pepper. It contains piperine which enhances the absorption of curcumin.

Just like what I said about beet kvass recently, there are certainly benefits to compounds like curcumin. But we have to be careful about making it seem like a cure-all that can make up for poor nutrition or lifestyle habits.

Where Can I Buy Turmeric Root?

Fresh turmeric root can be found in most health food or Asian markets, often stored right next to its relative, ginger. Look for short golden-orange roots that are firm and not wrinkled. They’re covered in a thin brown skin. 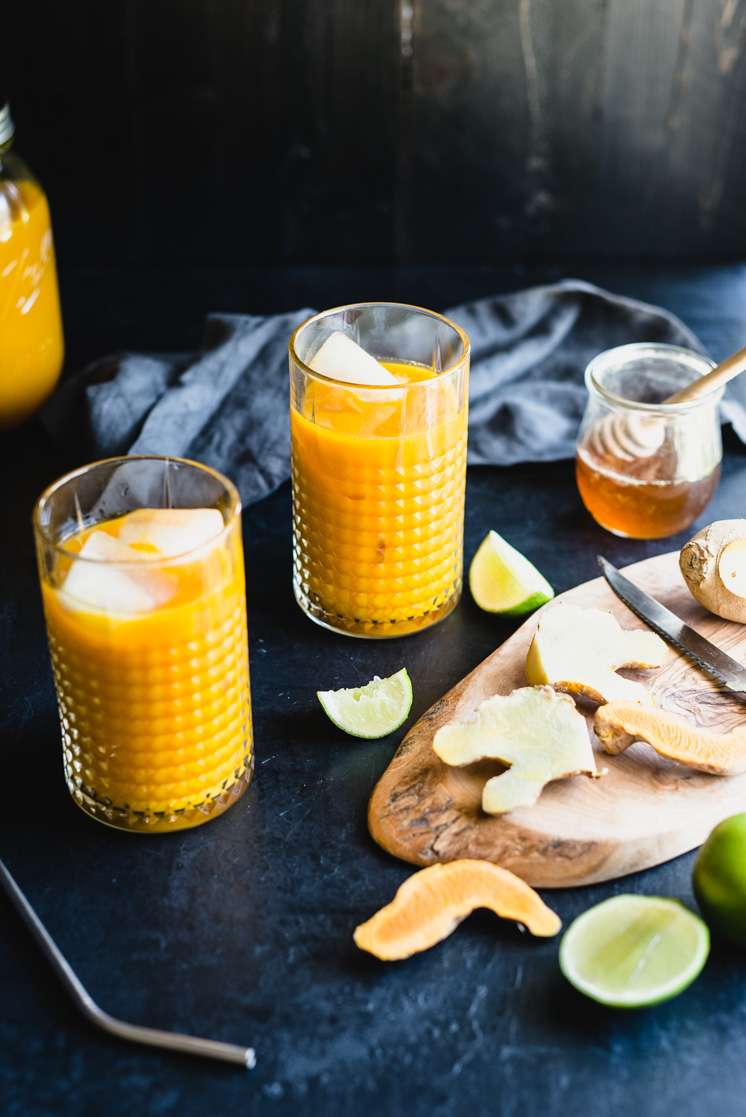 How I Make This Turmeric Drink

It’s so simple to make this Turmeric Root Tonic. Here’s how I do it…

I blend fresh turmeric root and ginger root with filtered water in a blender. Then I strain this through a mesh strainer to remove any bits of pulp and fiber. From there, I combine the turmeric root-ginger mixture in a pan with honey.

Then, I gently heat on low and stir until the honey dissolves and the raw flavor cooks out. Finally, I hit it with fresh lime juice and refrigerate until the Turmeric Root Tonic is chilled. Serve over ice, straight up, or warm.

I recommend adding a pinch of ground black pepper to the batch. And, adding collagen peptides would be a nice boost as well, though totally optional. 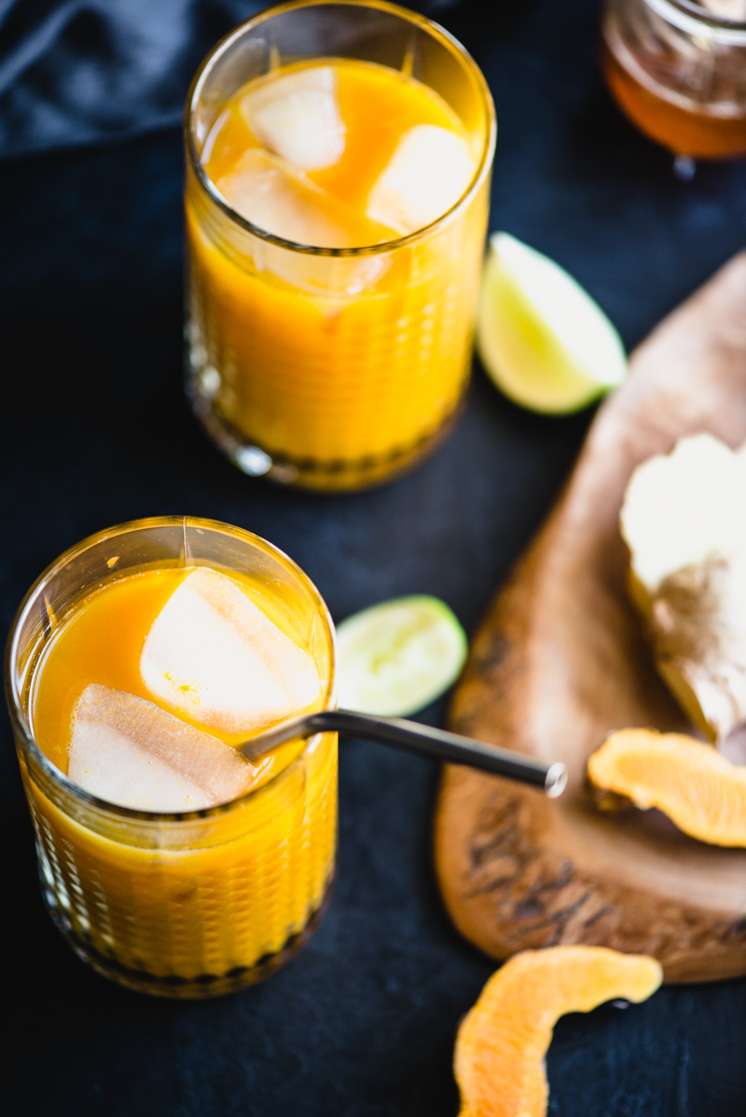 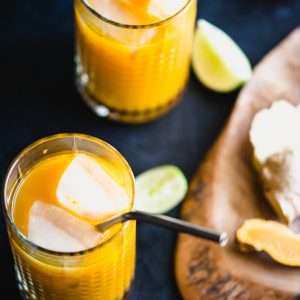 Turmeric Root Tonic is a great way to stay cool this summer. It's hydrating and the bright yellow turmeric fights inflammation. It's simple to make with just four main ingredients. Get the recipe now! Paleo and gluten-free.

Please consider the environment and avoid plastic straws. We use metal straws like these.

Have a question about this Turmeric Root Tonic? Let me know in the comments below! 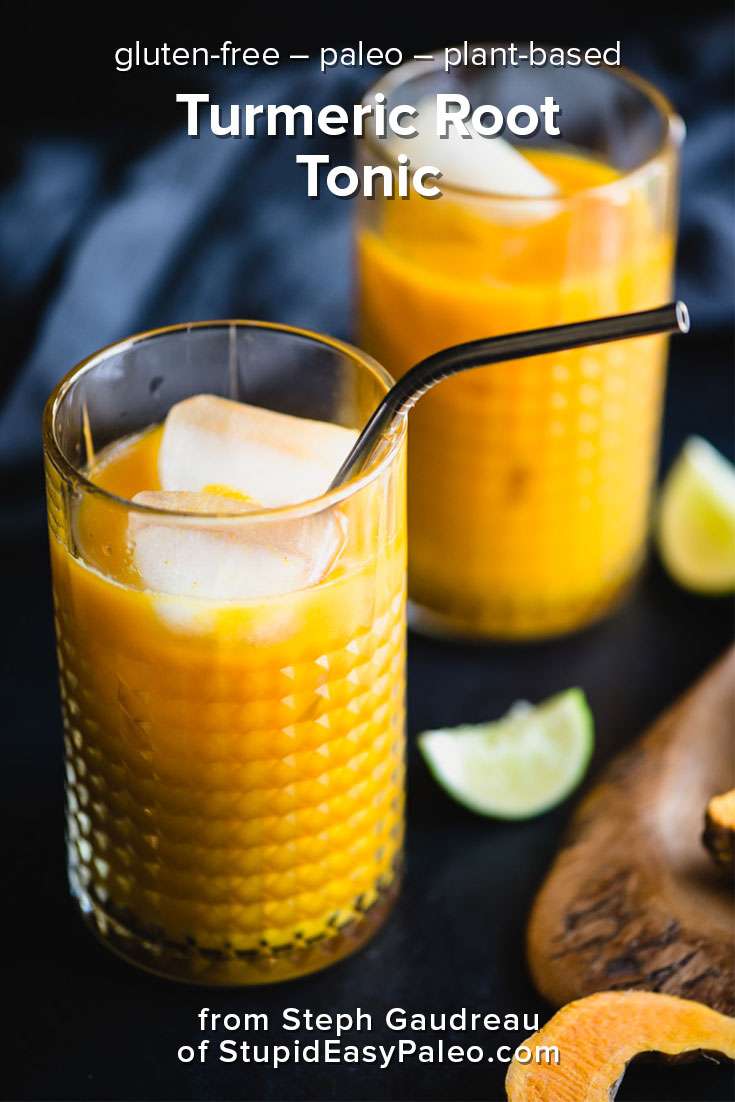 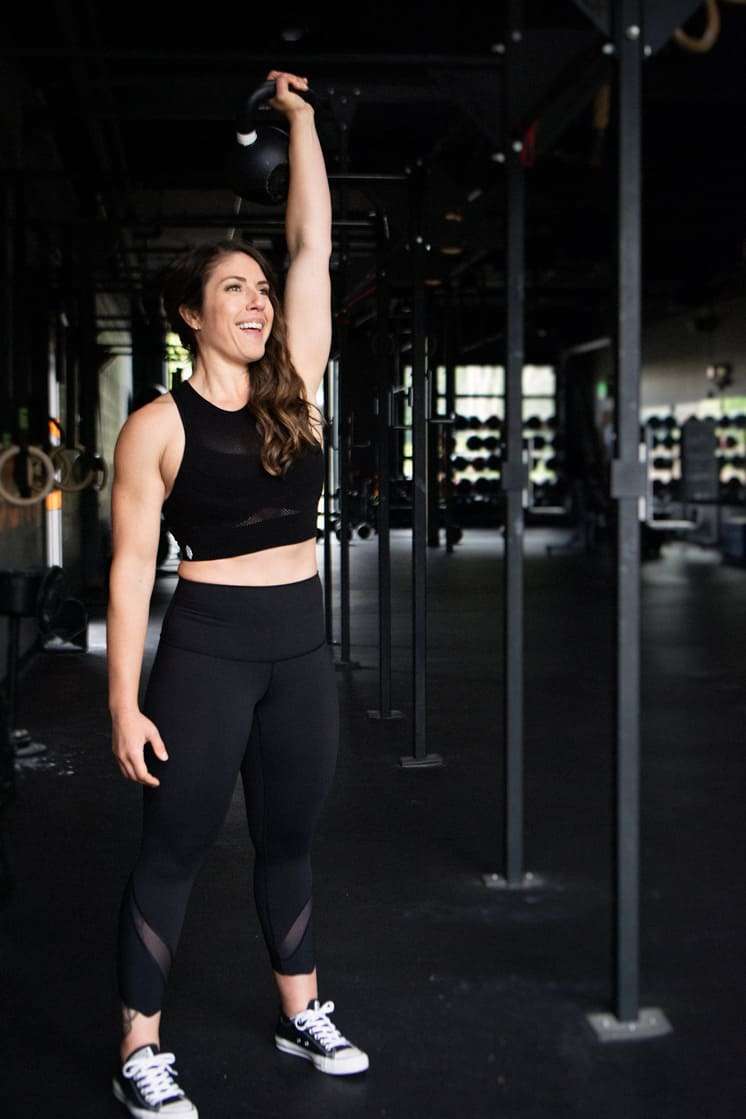 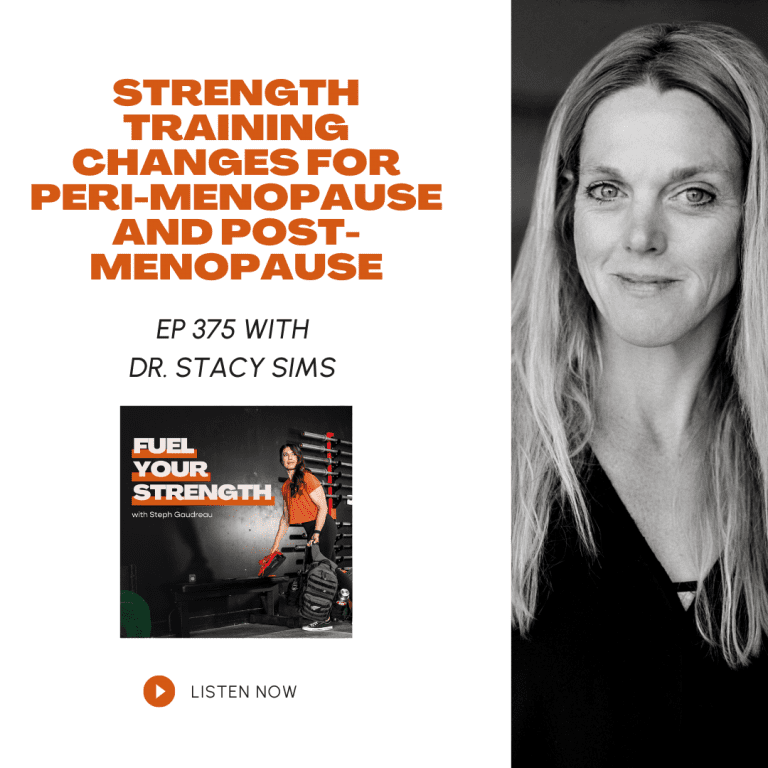 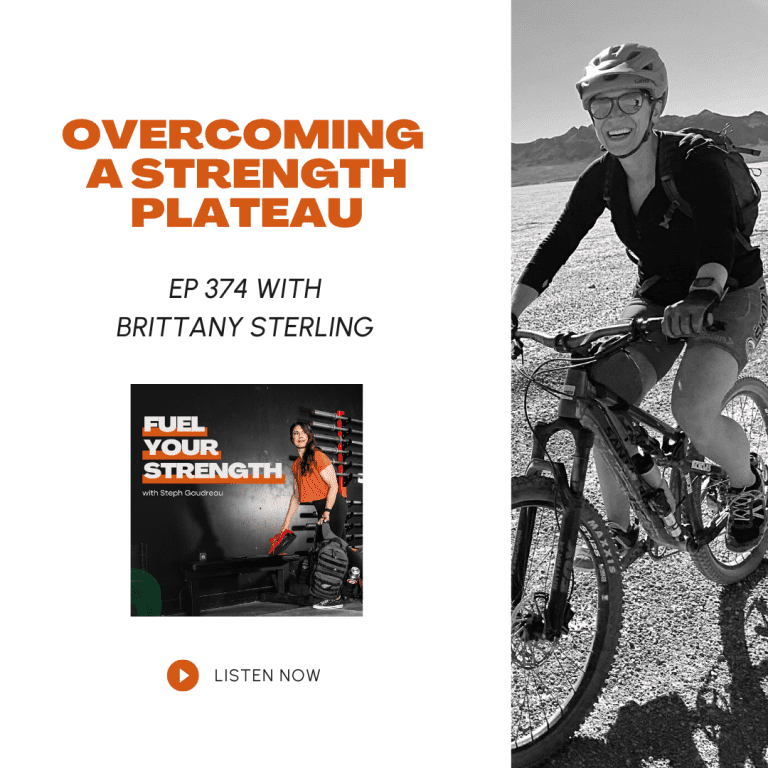 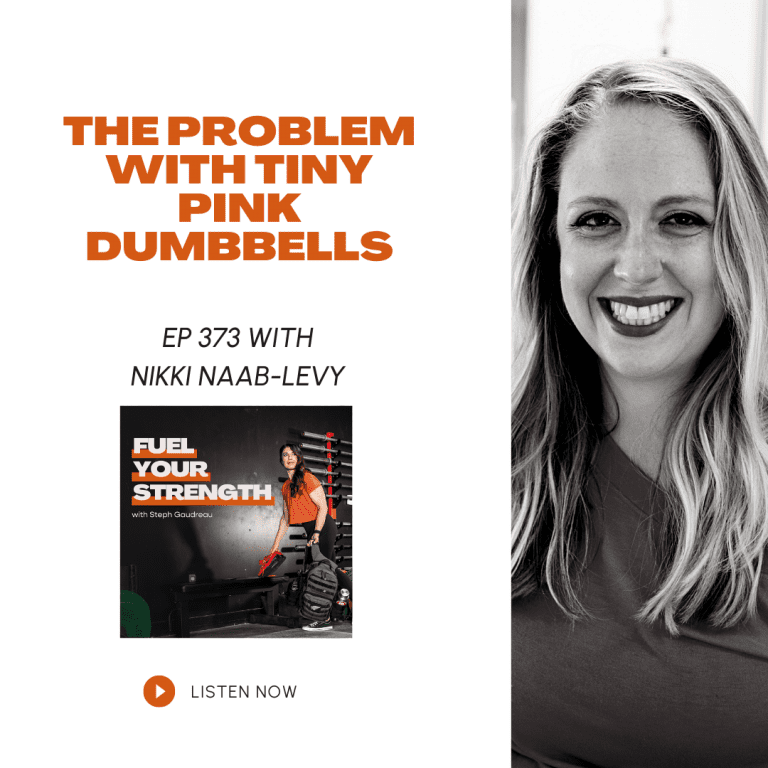 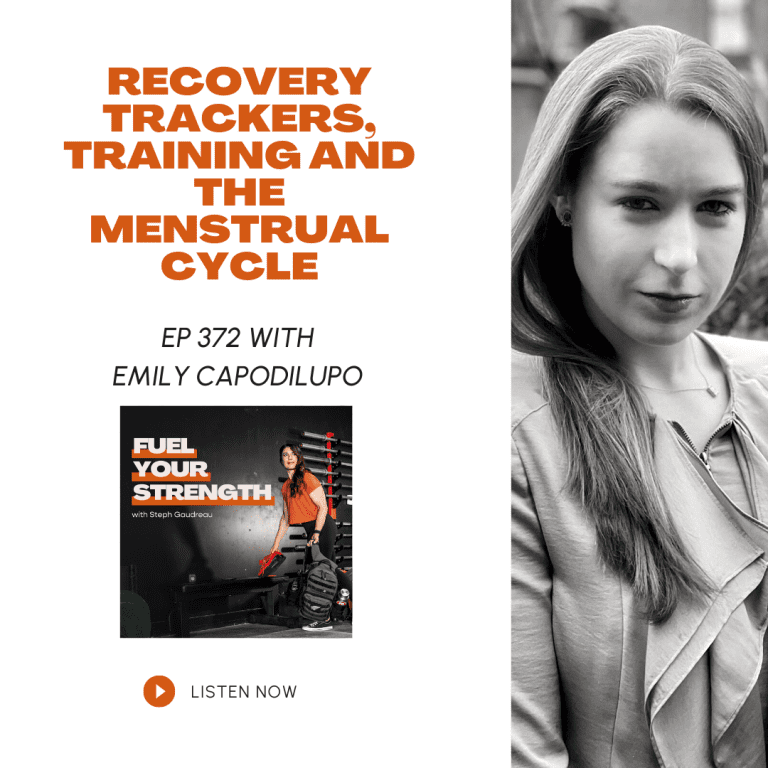