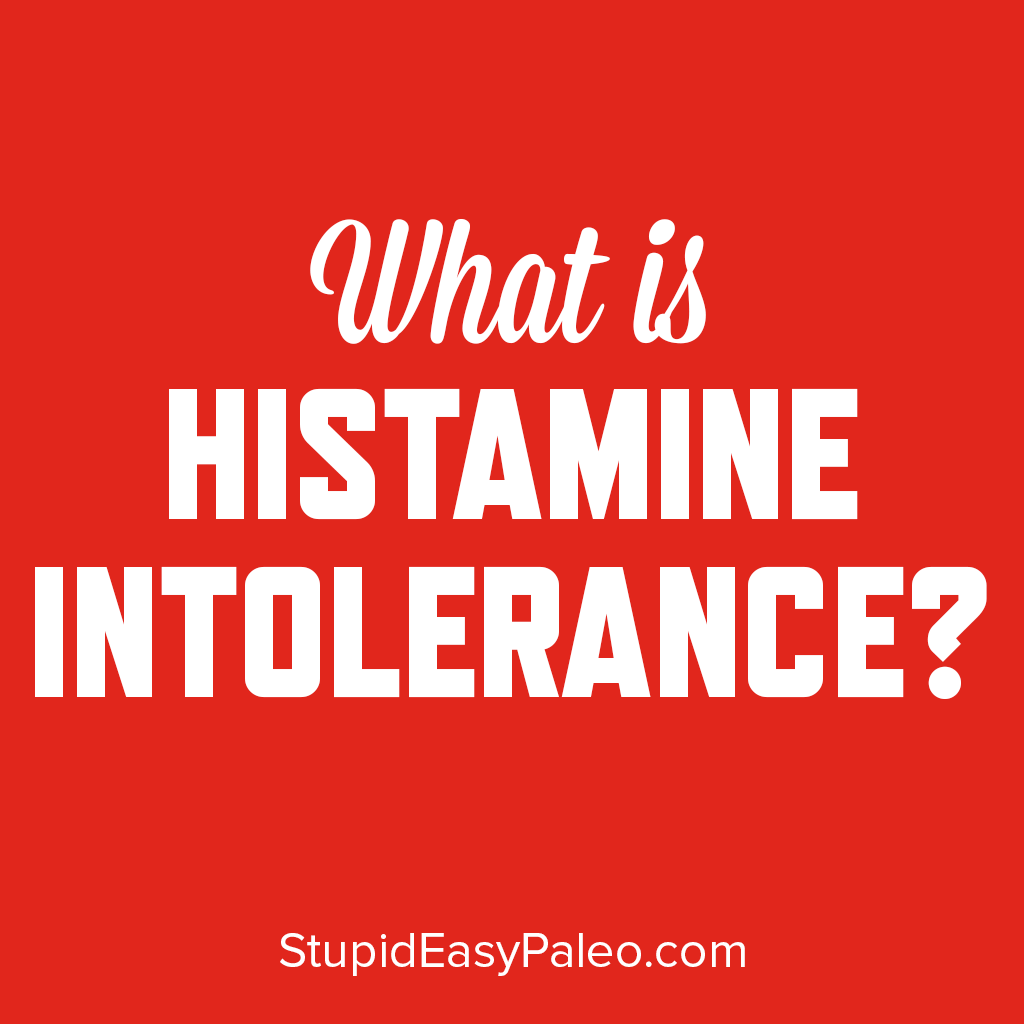 What is Histamine Intolerance? 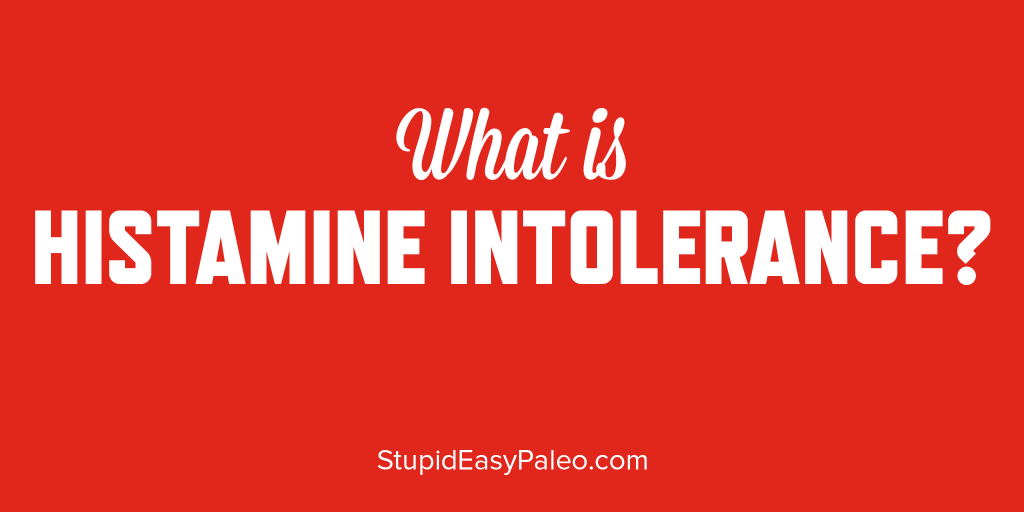 If you’ve been struggling with food intolerances that you can’t seem to pin down, you may be dealing with histamine intolerance, particularly if you’ve removed the usual suspects and done a 30-day elimination diet like Whole30.

I’ve been waiting to write this post for quite a while, but it’s now been well over a year since my husband stumbled upon histamine intolerance as the cause of his incessant eczema. He’s only had one major flare in over a year, so I decided it was time to share what we’re doing. More on that later.

Before I venture into what can go wrong, let’s quickly consider what’s supposed to happen with histamine in the body:

Histamine is a chemical compound which occurs naturally in the body and triggers the inflammatory response in certain body tissues. If you’ve ever taken an over-the-counter antihistamine to combat hay fever or seasonal allergies, you’re well aware of histamine’s role in making your respiratory tract feel wheezy and sneezy. (Those medications work by blocking histamine receptors which stops the reaction.) But histamine doesn’t just work on your nose and throat.

The main body tissues that release histamine (via mast cells) are the nose, mouth, gastrointenstinal tract and blood vessels and the brain (non-mast cell release). Histamine levels are also affected by hormones such as estrogen and cortisol.

Not only is histamine produced by the body, it’s also present in varying degrees in the foods we eat.

For a much more extensive look into this process, read these articles by Jamie Scott here and here.

What is histamine intolerance?

Let’s consider the word metabolism for a moment.

Metabolism, in simple terms, is the balance between the building of compounds (anabolism) and breaking down (catabolism) of compounds.

Normally, the body has an enzyme that deals with the breakdown of histamine and counteracts histamine build-up. It’s name is diamine oxidase or DAO. (Another enzyme, histamine-N-methyl transferase, deals with histamine breakdown inside cells.) The primary place DAO is doing its catabolic duties is in the gut and bloodstream.

If histamine metabolism is faulty, usually due to reduced levels of DAO, problems can arise.

Need a picture in your mind to help this all come together? Think of a gallon-sized jar with a spout at the bottom.

If you continuously fill the jar with water and keep the spout open, it won’t overflow from the top so long as you don’t fill faster than it drains out. That’s what is supposed to happen normally with histamine. DAO (the spout) allows histamine to be cleared so that the jar doesn’t overflow (histamine reaction).

If you continuously fill the jar with water and keep the spout closed (or you fill the jar faster than the water can drain out) eventually, it’s going to overflow from the top. That overflow is synonymous with a histamine reaction.

[By the way, there is still a LOT that’s not understood about histamine intolerance from a scientific point of view.]

Since histamine works on a variety of body tissues, the symptoms of histamine intolerance can range from issues of the gastrointestinal tract (cramping, diarrhea, etc.) to the skin (eczema, hives, etc.) to headaches, dizziness, cardiovascular symptoms like arrhythmia and even dysmenorrhea in women.

This diversity of symptoms is one of the reasons why histamine intolerance is hard to pin down.

How is food connected to histamine intolerance?

For better or worse, food plays a huge role in histamine intolerance because certain foods are naturally high in histamine. Annoyingly, some food, while low in histamine themselves, cause the body to release histamine already stored in cells.

In folks with low DAO activity, consuming histamine-rich or histamine-liberating foods cause the jar of water to spill over, and a symptoms occur.

Even more annoyingly, many of the foods promoted as part of a paleo-type diet are high in histamine and some people, despite “doing everything right” find that paleo “doesn’t work for” them or makes their issues worse.

Which foods are high in histamine?

Generally speaking, as food sits around and gets older, histamine levels increase due to accumulating bacteria and yeast. These microorganisms produce an enzyme that converts histadine to histamine, thereby raising the histamine content.

Even foods that are “fresh”—especially meats and fish—can rapidly ramp up in histamine. (More on how we deal with that in our household later in the post.)

Unfortunately, foods that are aged or fermented are the biggest culprits. And several of these foods are touted in paleo / real food circles because of their probiotic content.

These include but are not limited to:

And it continues with other foods such as:

Now, before you get depressed and think life is over because you can’t eat bacon or drink coffee again, there’s a solution so keep reading.

Beyond food, some medications or drugs can skew histamine levels, particularly those that block the action of DAO. Notable here are alcohol and nicotine.

Before you think this post is just me talking into the wind, let me fill you in on my husband’s struggle with histamine intolerance and how we’ve learned to manage it. (There is hope!)

Z, my husband, has suffered from asthma and eczema since childhood to varying degrees which would come and go in severity.

A doctor once told him, “That just happens to some people,” when he went in to the NHS (Scotland’s medical system) seeking answers.

Back in 2008, he found paleo when he read The Paleo Diet for Athletes and immediately adopted this way of eating. Though his overall health improved, it unfortunately did little to resolve his eczema.

For a long while, he thought the problem was an allergy to beef or eggs, so he avoided them religiously, but his skin problems persisted. Adding insult to injury, particularly bad flares left him with embarrassing, intensely puffy and red rings around his eyes as well as itchy patches on his neck and arms. Not fun when you have a customer-facing job.

Ever since I’ve known Z, he’s struggled with eczema on and off and never got an closer to solving it, until the summer of 2014. He’d just moved here—and we got married—in the spring. (Yay for no more long distances!) He was still avoiding beef and eggs, though he was now “enjoying” lots of probiotic-rich kraut and kombucha, snacking on jerky and dried meat, and tucking into the weekly food prep that I was doing.

In hindsight, his histamine levels were sky-high with all the fermented food and leftover meat he was eating. Frustrated that again his skin was flaring, he spent hours and hours poring over the Internet, trying to make sense of it. He circled back to histamine intolerance, something that had popped up on his radar almost a year prior.

He printed out a list of high-histamine foods to avoid, and we set out to try to nip this thing in the bud.

How We Manage Histamine Intolerance

If you’re dealing with histamine intolerance, one of the most important things to consider is what the root cause could be. You’ll want to address any potential gut infections, parasites, or SIBO first, then consider gut permeability issues.

If you’ve already cleaned up your diet and you’re eating paleo, you may be part of the way toward healing because you’ve removed grains, gluten, dairy and other gut irritants.

Once you’ve done that, stick to a low-histamine food list to see if you notice any improvement. Keeping a food log of intake can help you correlate flares with what you’ve eaten.

First, it’s important to note that Z doesn’t eat a zero-histamine diet. That’d be nearly impossible. However, he’s still able to enjoy many of the foods he likes because the key is balancing the histamine load and keeping it from accumulating too fast. (Remember my analogy of opening the spout to let water drain out of the jar at the same time you’re filling it! You don’t want histamine intake or release to overtake the action of your DAO enzyme.)

Our strategy involves balancing / managing food intake with supplementation and other lifestyle factors. I say “we” because I cook a majority of the time. Z eats paleo but avoids certain foods that heavily feature in a typical paleo diet.

There are low-histamine recipe sites such as this one, that focus on healing, anti-inflammatory foods, because what good does it do to avoid histamine, but then eat other foods that inflame the gut?

Note: Evaluate these for yourself first before you decide to take them. This is not medical advice, simply a summary of what works for Z.

If he suspects he’s eaten meat that wasn’t super fresh or a lot of high-histamine foods in one meal, he’ll often take a cocktail of supplements as a preventative measure. This gets expensive really quickly, so it’s best used as emergency protection, not as a means of gorging on high-histamine foods constantly.

He takes these daily:

Stress management and sleep are huge.

Consider stress. When you’re under stress, your body releases adrenalin, and cortisol is released to mop the whole thing up. This stress response causes immunoglobins to cause mast cells to release histamine. Eeek.

I can’t tell you which stress management skills will work best for you, but some suggestions to try are:

Sleep is also paramount, and high levels of histamine can interrupt sleep. See my article here on how to improve your shut-eye. Dietary intervention is probably the best ways to get your histamine levels under control so you can sleep better.

Information in this article was compiled from the above hyperlinked sources listed and our personal experience. Primary research sources for more information can be found listed at the end of this article.

Do you have questions about histamine intolerance? Put them in the comments below.

Pin this for later:

When you think about exercise, do you visualize PR 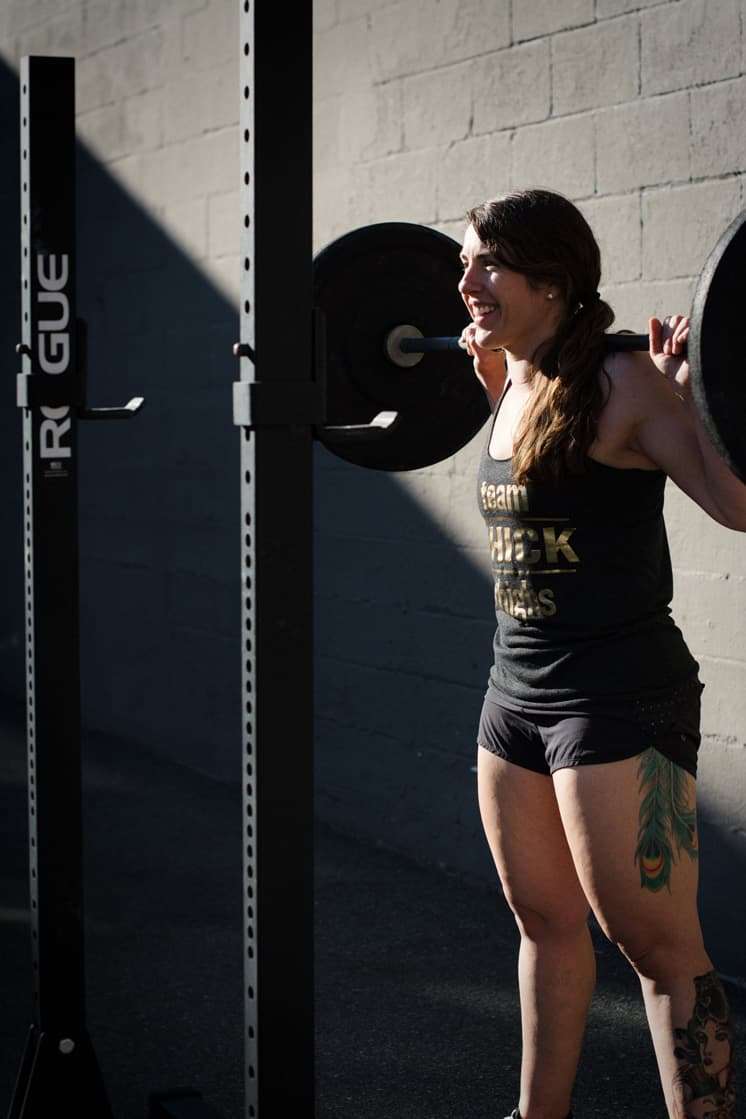 What is Low Energy Availability? (and How to Avoid It) 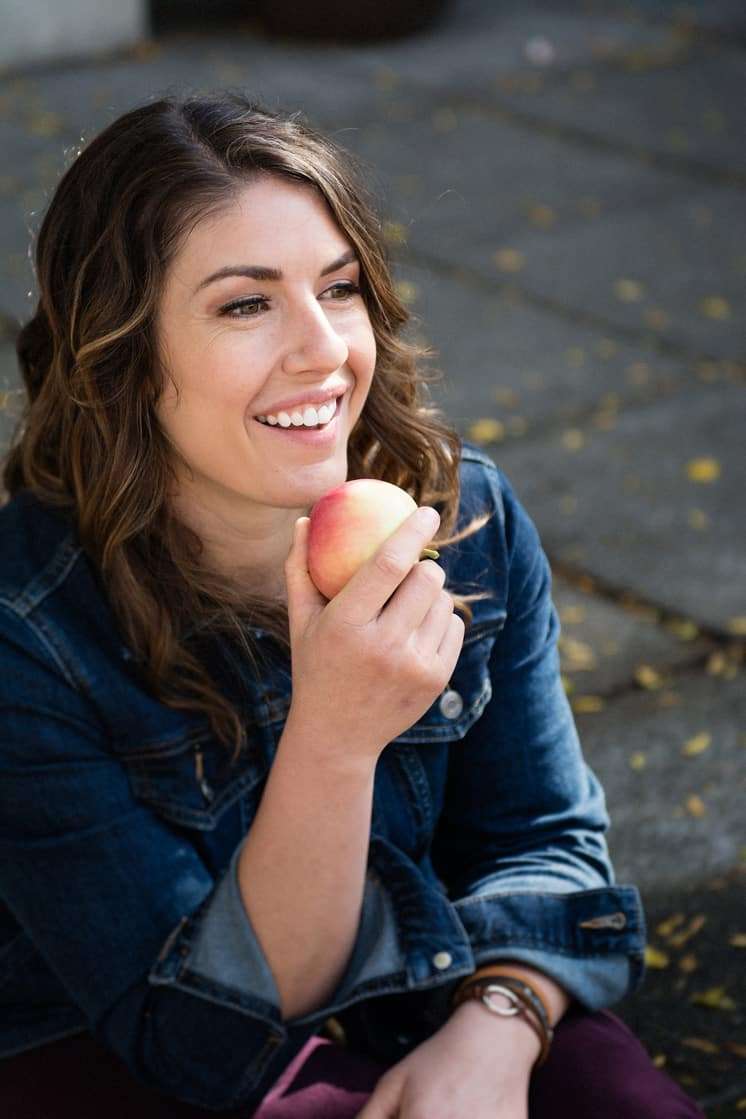 Intuitive Eating: Why Hunger Isn’t Your Only Cue 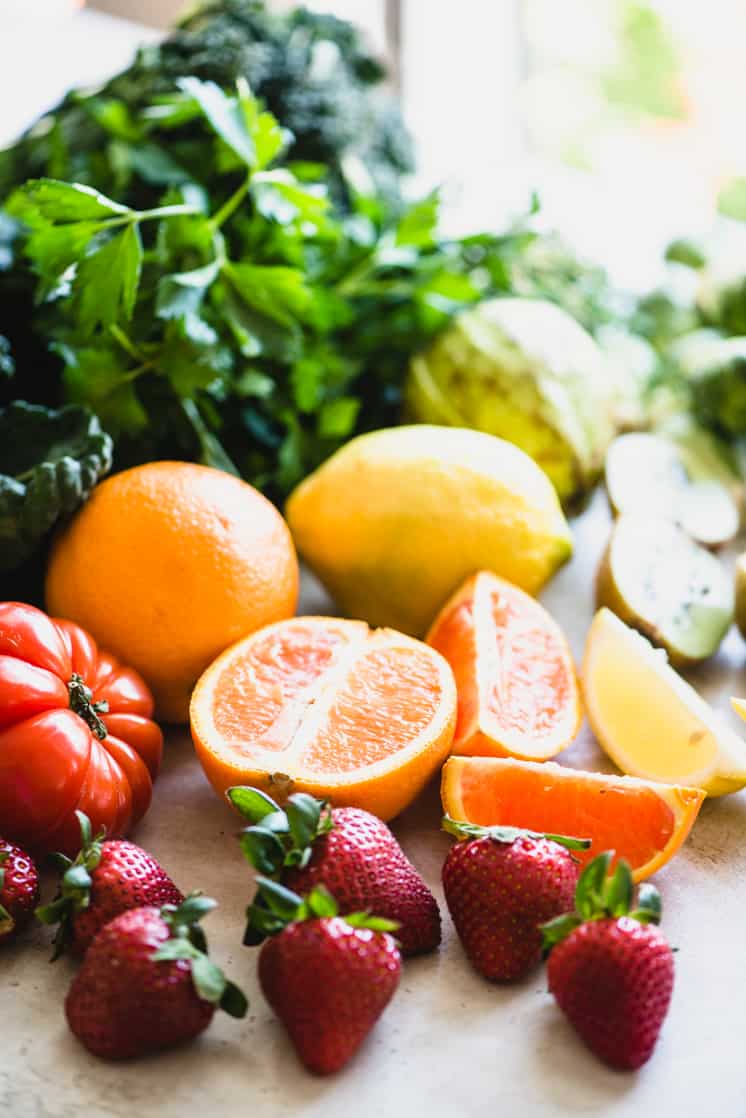 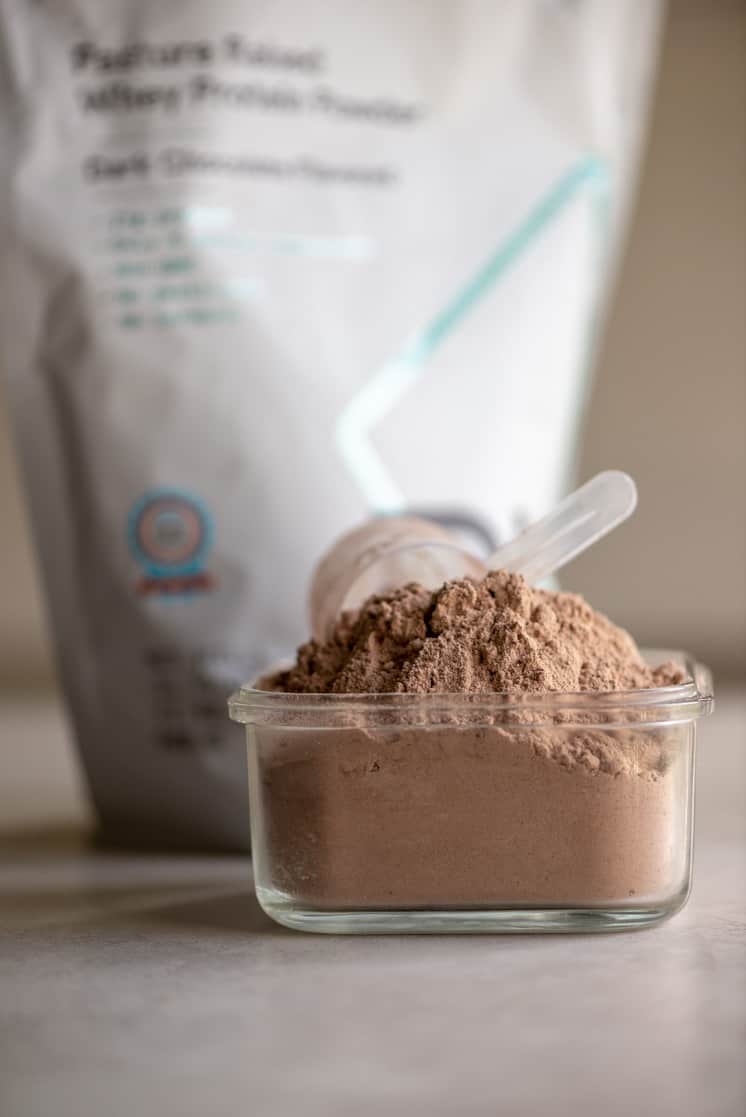 The Clean Label Project & What it Means for Supplements

Read More »
When you think about exercise, do you visualize PR