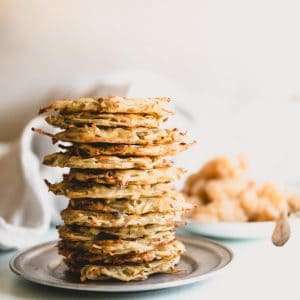 You don’t have to celebrate Hanukkah to enjoy these irresistibly crisp potato fritters. They’re a delicious side dish for roasted meats or burgers and taste great plain or with a topping of apple sauce. Traditional potato latkes follow a very simple formula of ingredients—shredded potatoes, onion, egg, and a binder like flour or matzo crumbs—fried in oil until they’re crisp. For our version, we’ve replaced the deep fryer with a blast of heat in the oven—and the matzo with potato starch—so the latkes are still very crisp, but gluten-free and easier to prepare.

Serve the latkes warm with a dab of applesauce on top.

Did you know my recipes are in an online meal planner? Check it out here!

This recipe was created and shared with permission by Mel Joulwan for our past collaboration with Paleo Magazine.